J.K. Rowling Doubles Down, Exposes Misogyny of the Woke 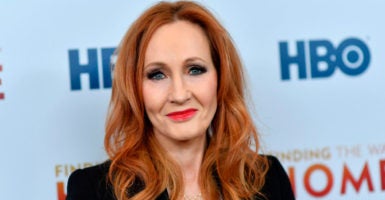 "'Woman’ is not a costume. ‘Woman’ is not an idea in a man’s head. ‘Woman’ is not a pink brain, a liking for Jimmy Choos or any of the other sexist ideas now somehow touted as progressive," says J.K. Rowling, pictured at "Finding The Way Home" premiere on Dec. 11, 2019 in New York City. (Photo: Angela Weiss/AFP/Getty Images)

The woke activists have all but told J.K. Rowling to shut up and go back to being barefoot in the kitchen.

The “Harry Potter” series author, long known for her liberal views, has been under attack for several days. Her crime? Tweeting that women is the right term, not “people who menstruate.” And then, to the horror of the Twitterati, Rowling didn’t apologize when there was an uproar. Instead she bravely tweeted a series of messages including, “It isn’t hate to speak the truth.”

Well, if there’s any message that doesn’t fly in the current woke environment, it’s that.

But in an extraordinary move, Rowling, instead of shutting up or apologizing, has written a long, personal essay explaining her views on sex, transgenderism, and feminism. In doing so, she dared to voice sentiments that billions around the world no doubt share—but many are afraid to even say these days, terrified of being hauled into human resources or facing other consequences.

Here are some of the passages from her essay:

I’m concerned about the huge explosion in young women wishing to transition and also about the increasing numbers who seem to be detransitioning (returning to their original sex), because they regret taking steps that have, in some cases, altered their bodies irrevocably, and taken away their fertility. Some say they decided to transition after realizing they were same-sex attracted, and that transitioning was partly driven by homophobia, either in society or in their families.

The writings of young trans men reveal a group of notably sensitive and clever people.  The more of their accounts of gender dysphoria I’ve read, with their insightful descriptions of anxiety, dissociation, eating disorders, self-harm and self-hatred, the more I’ve wondered whether, if I’d been born 30 years later, I too might have tried to transition. The allure of escaping womanhood would have been huge. I struggled with severe OCD as a teenager. If I’d found community and sympathy online that I couldn’t find in my immediate environment, I believe I could have been persuaded to turn myself into the son my father had openly said he’d have preferred.

It isn’t enough for women to be trans allies. Women must accept and admit that there is no material difference between trans women and themselves.

But, as many women have said before me, ‘woman’ is not a costume. ‘Woman’ is not an idea in a man’s head. ‘Woman’ is not a pink brain, a liking for Jimmy Choos or any of the other sexist ideas now somehow touted as progressive. Moreover, the ‘inclusive’ language that calls female people ‘menstruators’ and ‘people with vulvas’ strikes many women as dehumanizing and demeaning.

These are not the words of some hateful bigot. Rowling says she has read and thought about it extensively, and her essay shows that to be true.

And she’s bringing up issues trans activists are too willing to push aside. It is demeaning to women to say that a couple of surgeries are enough to give you the full female experience—and it frankly ignores science and the biological reality of being female.

Furthermore, Rowling reveals in the essay—for the first time—that she herself experienced abuse. After sharing that information, Rowling addresses the issue of women’s safety:

So I want trans women to be safe. At the same time, I do not want to make natal girls and women less safe. When you throw open the doors of bathrooms and changing rooms to any man who believes or feels he’s a woman – and, as I’ve said, gender confirmation certificates may now be granted without any need for surgery or hormones – then you open the door to any and all men who wish to come inside. That is the simple truth.

On Saturday morning, I read that the Scottish government is proceeding with its controversial gender recognition plans, which will in effect mean that all a man needs to ‘become a woman’ is to say he’s one. To use a very contemporary word, I was ‘triggered’. Ground down by the relentless attacks from trans activists on social media, when I was only there to give children feedback about pictures they’d drawn for my book under lockdown, I spent much of Saturday in a very dark place inside my head, as memories of a serious sexual assault I suffered in my twenties recurred on a loop. That assault happened at a time and in a space where I was vulnerable, and a man capitalized on an opportunity.  I couldn’t shut out those memories and I was finding it hard to contain my anger and disappointment about the way I believe my government is playing fast and loose with women’s and girls’ safety.

Rowling is bringing up realities the media and activists have done their best to ignore or suppress. In 2016, The Daily Signal’s Kelsey Bolar reported on how abused women opposed a new policy in Washington that opened up locker rooms and bathrooms based on chosen gender identity. ““Ever since the Y did this [allowing people to use bathrooms and locker rooms based on gender identity], I’ve been waking up sometimes with cramps in my legs and that feeling of terror again,” Gretchen Flores, who was assaulted in a locker room, told The Daily Signal. “If you were a woman assaulted by a man, it feels extremely unsafe.”

But of course Rowling’s personal and thoughtful essay wasn’t met with acclaim on Twitter:

Right now, women are fighting for the right to only compete against other women in sports, not be defeated by biological males. Women are fighting to keep bathrooms and locker rooms safe spaces. And as Rowling noted, they’re even fighting to be allowed to speak honestly about what being a woman means.

Was the end of feminism supposed to be a world where women were told to shut up about all these feelings?

It’s been a while since I read the “Harry Potter” series, but I recall admiring the enormous courage of the main character, the school boy who dueled with the villainous Lord Voldemort time and again. In an era of “cancel culture,” Rowling is showing she imbued her main character with a trait she herself has in abundance.