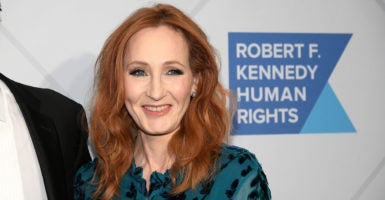 J.K. Rowling, the celebrated author of the “Harry Potter” series, is at risk of being “canceled.”

In a tweet on June 6, she mocked an article that refused to refer to “people who menstruate” as women. So, now Rowling risks becoming the victim of the so-called cancel culture by the social justice mob because she thinks women menstruate and that women should be called—wait for it—women.

How ironic that one of the greatest fiction writers of our time would be excoriated online for telling the truth.

Rowling continued to tweet clarifications that, in and of themselves, seem like radical statements—especially in light of the growing trend to make sex “fluid” and gender a continuous spectrum of New Age ideas.

Even though this seems like an obvious—if uncomfortable and awkward—biological fact, Rowling’s original, sarcastic tweet was enough to elicit outrage from fans and celebrities alike who twisted Rowling’s statement to be an attack on transgender people.

“You have power and influence. Why would you do this? What does it achieve?” Lambert tweeted. “Do you feel like more of a woman when you punch down? Are you threatened? Some trans men menstruate. Why does that affect you? Why do you want to police that?”

Even actor Daniel Radcliffe, who played Harry Potter in the films based on Rowling’s books, criticized the statements of the author who made him famous, although he clarified he had no beef with Rowling herself: “Transgender women are women. Any statement to the contrary erases the identity and dignity of transgender people,” he said in a statement.

There are two incredible things happening with the transgender movement, and both are magnified here with Rowling’s tweet and the outrage it spurred.

First, Rowling’s comment that women menstruate and the idea that it’s silly to avoid the word “woman” as though it’s an attack on “transgender women” should not in any way be controversial.

Rowling is 100% accurate, and the fact that she refuses to cede an inch of this ground to social justice warriors lambasting her on the internet is noteworthy.

Whether Rowling realizes it or not, it’s vital that people passionate about this issue refuse to allow the Orwellian distortion of language on this topic.

“Transgender women are women” or “transgender women get periods” are phrases that distort biological fact in favor of a progressive agenda and have no place in a textbook or serious, intellectual policy debate.

Second, that Rowling’s statement of fact caused such seething outrage and disdain for her personally is a disturbing trend.

Imagine an argument about the color of the sky—that’s just about where we are these days—except this topic, of course, has far more important ramifications.

Watching a verbal riot unfold in real time over Rowling’s benign comment demonstrates a tremendous willingness for a large number of people to gaslight themselves into upending reality for the sake of a politically correct cause embraced by a minority.

It’s one thing to say you’re interested in riding a horse, but only a horse and not a unicorn. It’s quite another for a crowd to gather and insist that you clearly must “hate” unicorns and seek to compel you to ride a unicorn.

Yet, here we are. This time, however, the health and well-being of our young people are at stake, and now, to make the transgender issue that much harder to parse, a mob seems willing to condemn someone for stating a biological fact.

Kudos to J.K. Rowling for her willingness to state that biological fact and the courage not to submit to a mob of progressive social justice warriors who willingly distort science to further a far-left agenda that is as harmful as it is a fraud.