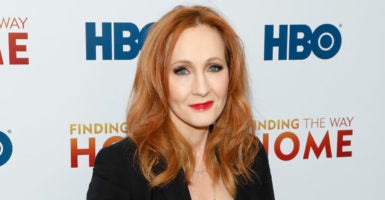 "If sex isn’t real, the lived reality of women globally is erased. I know and love trans people, but erasing the concept of sex removes the ability of many to meaningfully discuss their lives. It isn’t hate to speak the truth," says J.K. Rowling, pictured attending the "Finding the Way Home" premiere on Dec. 11, 2019, in New York City. (Photo: Taylor Hill/FilmMagic/Getty Images)

Unsurprisingly, Rowling, author of the “Harry Potter” series, was attacked by LGBT activists.

But Rowling refused to back down, sharing her thoughts further:

Unfortunately, this isn’t the first time there’s been a push to say that it’s not true that only women have periods. We’re reprinting a Daily Signal article from 2019 that looked at why this was such a big push among certain activists.

A friend of mine has an amusing tale of a heated fight she got in as a child with her then-teenage brothers that culminated in her accusing them of getting periods.

Needless to say, my friend didn’t end up with the upper hand in that particular sibling squabble.

But maybe she was just ahead of her time with her gender-neutral vision on periods.

Always, a brand of period pads, recently announced it will take the Venus symbol off its products. Always is “committed to diversity and inclusion and are on a continual journey to understand the needs of all of our consumers,” the brand noted in a statement.

Because in 2019, it’s apparently controversial to say that only women get periods.

For years, woke activists have been pushing for language to shift on the issues of periods and pregnancy. Thinx, a brand of underwear designed to be worn during periods, apologized during “Transgender Awareness Week” in 2015 for focusing too much on women.

“We feel it is our responsibility to send a reminder that menstruation is not a trait of, nor a defining factor of, a specific gender. It is something that can occur amongst all people,” the brand wrote at the time.

Two years later, Glamour magazine approvingly covered the open-mindedness of new menstruation products company Aunt Flow: “There’s also the recognition that it’s not just cisgender women who get periods: Trans men and people who don’t identify as one gender get them too, so the company has eliminated the gendered pronouns of her and she from their materials.”

In 2016, the Twitter hashtag #IfMenHadPeriods was controversial—for suggesting that men didn’t have periods.

Of course Planned Parenthood has jumped on the bandwagon, too, carefully talking about periods on its site in a gender-neutral way: “Not everybody who gets a period identifies as a girl or woman. Transgender men and genderqueer people who have uteruses, vaginas, fallopian tubes, and ovaries also get their periods.”

So now if you wear a kimono or don a Native American headdress—no matter how respectfully—that’s cultural appropriation and inappropriate if you are not Japanese or Native American.

But if you want to label a female experience—one that is dependent on having female body parts at birth—as being gender-neutral, that’s A-OK.

How is that fair?

As someone who has dealt with many an Always pad caked with my blood, I’m done with this nonsense.

Too much information? Well, sorry, but perhaps it’s our era’s almost Victorian prudishness about our bodies that has gotten us in this absurd Orwellian experiment where the appropriate way to talk is to discuss inherently female realities, like periods and pregnancies, as gender-neutral.

They simply are not.

It’s girls who are told that someday, they’ll have to deal with bleeding every month. It’s women who attend classes and hold jobs and juggle a million other things while their insides are churned and every last drop of blood is wrung out via too often painful cramps. It’s women who have to plan ahead and carry period pads or tampons or other products so they’re not splashing blood around in the course of everyday life. It’s women who stare at the blood, and realize they’re not pregnant—whether that’s welcome or unwelcome news.

This isn’t a universal experience, or one shared by men.

If someone who identifies as gender-neutral or male has a period, it’s because that person was born with female body parts—parts associated for millennia with women.

But of course, LGBT and other woke activists are ready to erase thousands of years of shared female experience just to ensure that a transgender or nonbinary person never has to be challenged in his worldview that perhaps our bodies are relevant to our gender.

So here’s a thought: Maybe if the language of women getting periods or a big company slapping a Venus symbol on menstruation products threatens you that much, it’s because you’re trying to silence something within you.

Everyone holds beliefs that aren’t celebrated by society. My religious views are constantly criticized or targeted by atheists or people of another faith. So are my political views. (Try telling people that you like some of President Donald Trump’s policies in, oh, any blue state.) Sometimes I speak back. Other times I hold my tongue.

A couple of years ago, I needed to buy shoes for a hike of several days that I was going on. I have wide feet, and after trying on a bunch of different pairs of shoes, I realized the pair that fit the best was a style of men’s shoes, not women’s. I was mortified: Why couldn’t the company have made women’s shoes in wide instead of me needing to wear men’s shoes?

Then I realized I was being absurd. I knew I was a woman, no matter what some company’s shoe sizing showed.

So I kept the shoes. And no, I never called the company and demanded they start identifying the shoes as gender-neutral.

Because at the end of the day, it wasn’t keeping me up at night.

Transgender people should be treated with respect and love, just like everyone else. But that does not mean all of society—from companies to individuals—should be forced to kowtow and affirm their preferred version of reality.

There are differences between men and women, and menstruating is one of them.

In our digital-dominated world, we seem to be veering further and further away from biological realities. We’re told it’s our minds and our spirits that determine our gender, not our actual bodies. We are ramping up the artificial-intelligence abilities of sex robots so no one has to be hassled by needing a real person for sexual gratification.

Writer Bridget Phetasy, speaking on Joe Rogan’s podcast in a recent episode, mentioned hearing a panel a few years back discuss whether eventually life itself would leap from its current carbon form to some new material.

So here’s a revolutionary idea: Our bodies matter.

Every company in America, and in the world, can change their language and symbols to make it appear that periods are gender-neutral.

But that won’t erase the reality that they’re not.

And once today’s activists realize that, there’s going to be a lot of disappointment.