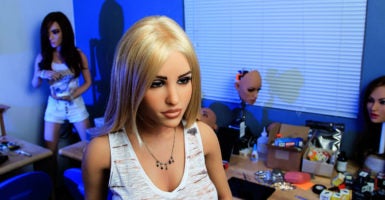 Sex robots are coming to America, and Houston is the first battleground.

The first “robot sex brothel” in America is set to open in Houston, Texas, this November. The mayor is currently investigating how to restrict or regulate it.

This disturbing development is sure to have a negative impact on society.

The brand of brothels, KinkSdollS, is owned by Yuval Gavriel. The first location opened in Tokyo in 2017. Clients can test the merchandise and pay by the half-hour to be alone with a doll.

Concerned citizens in Houston are right to point out that sex robots are unsafe, unsanitary, and likely to increase demand for sex trafficking.

Psychologists too have warned that sex robots could increase sex addiction. This is unsurprising given the science of pornography.

Sexual encounters with robots could cause even further problems.

Congress perceived this danger and this past June, the House passed the Curbing Realistic Exploitative Electronic Pedophilic Robots (CREEPER) Act, a bill to “ban the importation and transportation of sex robots and dolls that look like children.”

House Judiciary Committee Chairman Bob Goodlatte pointed out one reason why these robots are so horrifying: “Customers can order bespoke dolls, providing pictures of specific children they would like the doll to resemble. They can indicate a preferred facial expression such as sadness or fear.”

This kind of behavior is not just unsettling, it is dangerous. Abusers can simulate violent fantasies on the dolls—bringing them one step closer to abusing real children. The same thing can be said of adult sex robots.

They will only breed the mentality of objectifying women and may contribute to the normalization of sexual violence.

Indeed, the potential effects of sex robots on society could be devastating.