Polygamy, Robot Sex Are Consequences of the Sexual Revolution 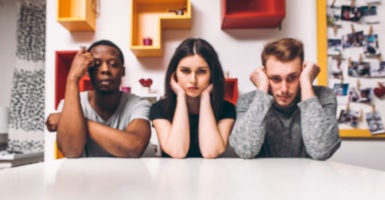 Not for nothing, but the latest fruits of the sexual revolution are even more bizarre than most of us imagined.

We knew things would get a little freaky, but maybe we didn’t know it would involve an upswing in polygamy, amorous activities with plastic women, or cuddling sessions with electric candelabra.

But that is the state of affairs as we approach Valentine’s Day this year.

We shouldn’t be surprised. When a society deifies sexual expression, it deifies a jealous god who will not be satisfied until every biological, social, and moral norm is overturned.

Consider the upswing in open marriages. In a recent edition of The Chronicle Review, Carrie Ichikawa Jenkins, a British-Canadian philosopher, argues that polygamy should be normalized. Jenkins practices polygamy (which she calls “polyamory”) with her husband, Jonathan Jenkins Ichikawa, and her boyfriend, Ray Hsu.

Jenkins and her husband have been open about their polygamy since July 2011, shortly after their wedding. Jenkins notes that people are judgmental, “lecturing” her for taking part in something they consider unnatural and immoral.

But Jenkins responds that polygamy is quite natural and moral.

She argues that polygamy is a moral way of life, with open marriages consisting of nothing more than ethical individuals being faithful to their multiple true loves.

Or, consider the emergence of sexual love with multiple sex dolls. Recently, The Guardian ran a story on James, a 58-year-old from Atlanta, Georgia. James, it turns out, is married to a human woman, Tine, but is also the owner of four life-size silicon sweethearts.

Two years ago, James’ wife left the home briefly to care for her ailing mother. Months later, she returned to find her husband surrounded by four new “ladies,” remarkable for their physical dimensions and their willingness to remain silent.

In short order, she learned that James had been “dating” the robots—taking them for picnics, watching television together, and engaging in, er, nocturnal activities with them.

James’ plastic princesses are the fruit of an emerging industry of animatronic, AI-enabled silicon sexbots. These sexbots are custom-made, complete with silicon body parts, heating and lubrication systems, and changing facial expressions.

The idea of sex robots is not new. In 2007, futurist David Levy published “Love and Sex with Robots,” in which he argued that robotic love would soon be embraced in the West.

In a recent interview, Levy argued that robotic love has many merits, as it could make prostitution obsolete, teach humans a greater variety of lovemaking positions, and provide pedophiles an outlet for their desire.

“Look. One has to accept that sexual mores advance with time, and morality with it,” Levy said in a recent interview. “Nothing can be ruled out.”

Recently, Inside Edition ran a story on Amanda Liberty, 33, of Leeds, England, who “married” her favorite chandelier. Liberty, who identifies as objectum sexual, says she just “knew” she would marry “Lumiere” the moment she first saw “her” on eBay last year.

In spite of the marriage, Liberty remains in an open relationship with her collection of more than 20 other lighting fixtures:

None of my chandeliers are jealous of each other. They understand that I love them all for their different personalities. For example, I love kissing and cuddling Lumiere, but I sleep with Jewel every night, as she is portable and very nice to cuddle.

Relentlessly true to the inner logic of the sexual revolution, polygamy, sexbots, and object-sex are part of the relentless drive to redefine marriage, sex, and romantic love. We are hard-wired for sex, according to this logic, but society must not cast judgment on our choice of sexual union.

Other trends include Ivy League attempts to normalize sex with animals (bestiality) and dead people (necrophilia).

But make no mistake. These latest iterations of the sexual revolution are unnatural and immoral. Their public emergence might tell us what “is” happening culturally, but it cannot tell us what we “ought” to do.

For the “ought,” we must turn, as our Founding Fathers did, to the Judeo-Christian view of humanity and sexuality. From it, we learn that God created human beings in his image and likeness, providing us with spiritual and moral guidance so that we could flourish and experience life’s goodness.

Central to this moral guidance is the truth that marriage and family are the core social units of society. Together they form the most important context in which children are shaped to understand themselves and their relationship with the world.

So, on Valentine’s Day this year, let’s make clear to our children and to society that marriage is between one man and one woman, and that any departure from that norm will leave us empty and pitiful in our attempts at sexual fulfillment.