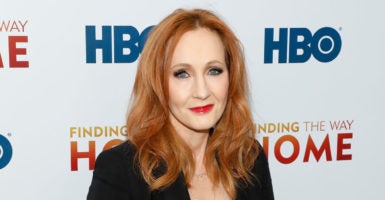 J.K. Rowling, the author of the beloved “Harry Potter” book series, came under attack Thursday for a tweet defending a researcher who lost her job for saying that “men cannot change into women.”

Rowling tweeted Thursday in defense of British researcher Maya Forstater, who lost her job after tweeting that “men cannot change into women,” the Independent reported Thursday. Forstater was referring to biological males who identify as transgender women.

“Dress however you please,” Rowling tweeted. “Call yourself whatever you like. Sleep with any consenting adult who’ll have you. Live your best life in peace and security. But force women out of their jobs for stating that sex is real?”

The Harry Potter author included the hashtags #IStandWithMaya and #ThisIsNotADrill in her tweet.

“Harry Potter writer J.K. Rowling made a bold statement against transgender equality on Twitter, confirming to her millions of followers that she is sympathetic to transgender exclusionary radical feminists (TERFs),” wrote LGBTQ Nation writer Alex Bollinger.

I grew up as a trans child reading your books as an escape,” one user wrote. “I would often pick out names from characters to give to myself, before I ever felt comfortable in who I was. This decision, to support people that hate me, and want to do me harm. It brings me to tears… Why. Why?”

“My daughter, who is trans, is a big fan of yours,” another user wrote. “It breaks my heart to see you post something indicating that discrimination against her is perfectly fine behaviour for an employee. The world’s most credible medical orgs affirm trans people. Please catch up.”

Another user mocked Rowling by tweeting a play on the title of one of her books, “Harry potter and the transphobe’s stone.”

Others supported Rowling for speaking out.

“Huge thanks to you for speaking out,” one user tweeted.

“If we’re cancelling JK Rowling for saying biological sex is real, then WTF even is feminism,” tweeted Javelin’s Vanessa Oblinger with the hashtag #IStandWithMaya.

“JK Rowling getting cancelled is proof you can never be woke enough for the Left,” tweeted Campus Reform’s Cabot Phillips. “You can tirelessly promote SJW causes for a decade but will instantly be labeled a nazi bigot if you diverge slightly from their narrative. Intersectionality is fun!!!”

“The left absolutely cannot help themselves from self-destructing,” added writer Bridget Phetasy. “Instead of using the momentum from the impeachment to win hearts and minds, they’re cannibalizing beloved author, JK Rowling. All they have to do is not be crazy. And they can’t do it.”

Forstater herself responded to Rowling’s tweet by expressing her thanks for the author’s support. “OMG! We are all crying. This is all i wanted for Christmas,” Forstater tweeted.

OMG! We are all crying. This is all i wanted for Christmas https://t.co/5ucPGUHIxY