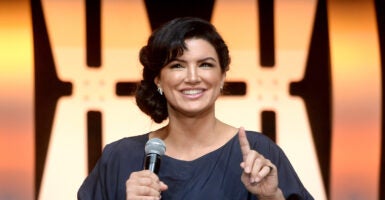 Actress Gina Carano found herself canceled after she made a social media post the left didn't like. However, she managed to bounce back, finding work with The Daily Wire. (Photo: Daniel Boczarski/WireImage for Disney/Getty Images)

Cancel culture runs rampant in today’s America. A 10-year-old tweet that mysteriously “resurfaces,” a past campaign donation, or even the slightest critique of any of the left’s sacred tenets seems to be enough to draw the attention of an angry mob—or even get someone fired.

With more and more people being “canceled” by the left, it’s important to remember those folks who’ve lost their livelihoods to cancel culture.

Gibson, the former president of American gaming studio Tripwire Interactive, became a victim of the petulant mob when he lost his job for tweeting in support of Texas’ new pro-life legislation.

“Proud of #USSupremeCourt affirming the Texas law banning abortion for babies with a heartbeat,” Gibson tweeted earlier this month, “As an entertainer I don’t get political often. Yet with so many vocal peers on the other side of this issue, I felt it was important to go on the record as a pro-life game developer.”

“The comments given by John Gibson are of his own opinion, and do not reflect those of Tripwire Interactive as a company,” read a statement by Tripwire interactive announcing Gibson’s departure. “His comments disregarded the values of our whole team, our partners and much of our broader community.”

Silvester was a police officer working in Bellevue, Idaho, who was fired after he posted a TikTok mocking NBA star LeBron James for his statements following the death of Ma’Khia Bryant.

After Bryant, a 16-year-old black girl, was fatally shot by a white police officer in southeast Columbus, Ohio, James tweeted a photo of the officer with the caption “You’re next. #accountability,” per CNN.

The shooting occurred just 30 minutes before the verdict in the George Floyd case.

After Silvester’s TikTok clip went viral, he was suspended for a week without pay, pending further investigation.

In an interview with a local TV station KMVT, Silvester said, “I started to hear rumors through the grapevine that the mayor was brainstorming how he could terminate me and avoid any political blowback on his part, and so I kind of anticipated this was going to be the result. I was going to lose my job.”

Cawthon was the creator of the hugely successful “Five Nights at Freddy’s” video game series who was cancelled in June after fans decided to search Open Secrets, a website that lists political donations, for information regarding his campaign contributions.

When it was revealed that Cawthon had donated money to several Republicans, including Senate Minority Leader Mitch McConnell and former President Donald Trump, calls for him to retire began to circulate online.

Initially, Cawthon tried to weather the storm, and refused to apologize, posting, “I’m a Republican. I’m a Christian. I’m pro-life. I believe in God,” Cawthon continued, “I also believe in equality, and in science, and in common sense. Despite what some may say, all of those things can go together. That’s not an apology or promise to change, it’s the way it’s always been.”

Eventually the pressure became too much, and Cawthon announced that he would be leaving the series. “I miss making games for my kids, I miss doing it just for fun … All of this is to say that I am retiring.”

Flynn and his wife sent an email to school officials expressing their concern that their daughter’s world geography and history classes contained curriculum and materials that were unrelated to the topics and were inherently political.

Per the Washington Free Beacon, “Middle school history teacher Kim Randall created an avatar of herself for her online classroom that wore a Black Lives Matter T-shirt and used materials that depicted police officers as ‘risks’ to black people and black people as ‘risks’ to white people.”

After a series of meetings with the school’s superintendent and committee members, Flynn and his wife decided the best course of action would be to move their two children from the school district and send them to a private Catholic school.

Flynn lost his job in January when he was told that his contract would not be renewed, with school officials citing “significant philosophical differences.” Flynn said that he had “never been provided any indication” that he would be fired.

Carano was fired from her leading role on Disney and Lucasfilm’s “The Mandalorian” after the actress posted a story on her Instagram comparing the current political climate to Nazi Germany.

Lucasfilm cut ties with the actress, writing in a statement, “Gina Carano is not currently employed by Lucasfilm and there are no plans for her to be in the future. Nevertheless, her social media posts denigrating people based on their cultural and religious identities are abhorrent and unacceptable.”

Carano’s fans were quick to point out her outspokenly leftist costar Pedro Pascal had shared a meme comparing the Trump administration’s immigration policies to Nazi concentration camps, yet was able to keep his job.

Carano was able to rebound and is currently working with the Daily Wire on a new film.

Bhattacharya was a student at the University of Virginia School of Medicine who was banned from campus after he questioned a speaker’s definition of microaggressions during a panel discussion.

After an assistant professor logged a complaint about Bhattacharya’s questions during the panel, an administrator mandated that he get counseling before being able to return to class. When  Bhattacharya refused, he was suspended and barred from returning to campus, Reason reported.

Bhattacharya is now suing the school for violating his First Amendment rights.

Anderson is the author of the bestselling book “When Harry Became Sally,” which details the rise in transgender and LGBT ideology in the U.S. The book that was removed from Amazon’s digital marketplace after the company claimed it framed “LGBTQ+ identity as a mental illness.”

In a statement made to The Daily Signal, Anderson argued against this accusation, stating “The phrase ‘mental illness’ does occur in the book twice—but not in my own voice: once quoting a ‘transwoman’ writing in The New York Times, and once quoting the current University Distinguished Service Professor of Psychiatry at Johns Hopkins.”

The book is still unavailable on Amazon.

Hartson was the editorial director of the Center Street imprint, a conservative publishing entity under the larger Hachette Book Group umbrella. She was known for buying the rights to publish books by controversial figures associated with former president Donald Trump, including his son Donald Trump Jr. and Corey Lewandowski.

As more and more liberals within print media began expressing their resentment toward the former president and all things associated with him, views like Hartson’s became more unwelcome.

In the aftermath of the Jan. 6 riot at the Capitol, Hachette shifted focus and promised “no hate speech, no incitement to violence, no false narratives,” as reported by the New York Times.

Coincidentally, it was slightly before Hachette made this announcement to their team that Hartson was fired.

Tong was a student at Fordham University in New York who came under fire for a series of social media posts he made that went against leftist orthodoxy, as reported by the Fordham Observer.

During last summer’s riots, Tong posted a photo of the slain retired police captain David Dorn, a black man who died while responding to a looting in St. Louis, Missouri, along with the caption, “Y’all a bunch of hypocrites,” referencing the fact that Dorn’s death didn’t spark the same amount of outcry among protestors as other high-profile deaths.

The day after, Tong posted an image of himself wielding a gun captioned, “Don’t tread on me. #198964.” June 4, 1989, is the date of the infamous Tiananmen Square massacre. For Tong, a Chinese immigrant, the photo was a symbol of resistance to tyranny.

His fellow students and school administrators took the photo differently.

As a result of the photo and social media posts, Tong was banned from coming to Fordham’s campus without permission, and barred from joining any extracurriculars. As part of Tong’s punishment, he was told he had to complete a series of implicit bias trainings.

Tong is currently suing the school for violating his First Amendment rights, per The Fire.

Vlaming was a French teacher at West Point High School in Virginia who was fired for not using a transgender student’s preferred pronouns.

In an interview with The Daily Signal, Vlaming said, “I explained to my principal that I couldn’t in good conscience pronounce masculine pronouns to refer to a girl. He gave me an official written reprimand that said it was the first step in a process that would lead to my termination.”

The former French teacher is currently bringing his case to the Virginia Supreme Court, per Christian Broadcasting Network.

Gordon was a teacher at Garces Memorial High School, a private, Catholic school in Bakersfield, California, and is the author of the book “Catholic Republic: Why America Will Perish Without Rome.” He was fired from his job after he made comments critical of the Black Lives Matter movement, specifically calling it a terrorist organization.

After his comments became more widely known, there was fierce pushback from the other members of the Garces Memorial staff. A petition demanding Gordon’s termination began making its rounds throughout the school, leading to his eventual firing.

In an earlier interview with radio host Richard Beene on “The Richard Beene Show,” Gordon solidified his position, saying, “They oppose themselves to Christianity, which is beset on all sides by hatred from the secular left, but it’s also been beset from within by a kind of Stockholm syndrome masochism which you’ve seen by my firing at Garces”

San Marco was a student at Syracuse University in New York who lost her job writing for her local newspaper after she wrote an op-ed piece for another conservative outlet denying the existence of institutional racism and that police unfairly targeted black people, as reported by Fox News.

San Marco’s former editor-in-chief, Casey Darnell, argued that “Dismissing the existence of racism, whether institutional or otherwise, dismisses the lived experiences of people of color, especially our black community members,” and that “San Marco’s article reinforces false and dangerous stereotypes of Black people as criminals, and dismisses that police officers kill black people at disproportionately higher rates than white people.”

In a Fox News interview conducted after her firing, San Marco stood by her piece, saying, “Now more than ever I feel confident in my views and research. There is nothing I would have done differently. I stand by my analysis.”