Biden Refers to His Vice President as ‘President Harris’ 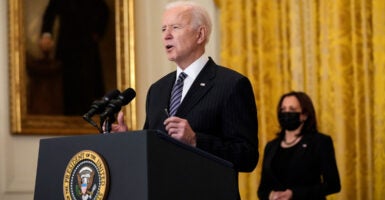 “Now, when President Harris and I took a virtual tour of a vaccination center in Arizona not long ago, one of the nurses on that tour injecting people and giving vaccinations said that each shot was like administering a dose of hope,” Biden said during the announcement at the White House.

“It’s my great honor to serve as your commander in chief,” Biden said in those remarks. “I look forward to hearing your active duty and recommendations of how we will work together to keep the American people safe, meet every challenge in the 21st century. I want to thank you both.”

“And I want to thank the sec, the former general, I keep calling him general, my, my uh, the guy who runs that outfit over there,” the president continued.

“I want to make sure we thank the secretary for all he’s done to try to implement what we’ve just talked about and for recommending these two women for promotion,” he said. “Thank you all. May God bless you all and may God protect our troops.”

The president and key advisers have been traveling to celebrate his signing of the American Rescue Plan after the House and Senate passed it. Biden visited Pennsylvania on Tuesday; Harris and second gentleman Doug Emhoff visited Nevada on Monday as well as Colorado on Tuesday.

Both the president and vice president were scheduled to visit Georgia on Friday, the White House confirmed.