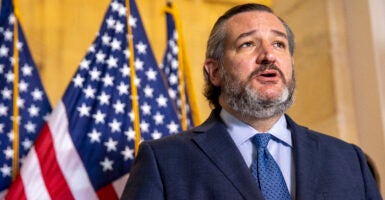 In a letter Sunday to Defense Secretary Lloyd Austin, Cruz asked him to arrange a meeting with Marine Commandant Gen. David H. Berger.

“The last week has witnessed the Pentagon mobilize systematic, public attacks against television host Tucker Carlson that in substance, tone, and political resonance are inexplicably inappropriate,” Cruz wrote to Austin.

It’s not unusual, of course, for media commentators to critique military policy or military leaders. What was unusual this time is that the military, which typically is nonpartisan, appeared to respond to Tucker in a coordinated way.

This spectacle risks politicizing the military after several centuries of efforts to keep military officials out of domestic affairs, undermining civil-military relations by having the military take a side in a contentious cultural dispute, and the perception that military leaders are happily weaponizing the institution against political critics of the sitting administration.

This kind of behavior, while perhaps typical in a military-controlled Third World country, is completely unacceptable in the United States of America.

A Marine unit apologized to Carlson after pouncing on his criticism of a Biden administration military policy.

Members of the North Carolina-based unit issued numerous tweets against Carlson after the host mocked the administration’s highlighting of combat flight suits designed for pregnant women. Those tweets later were deleted.

The Defense Department did not immediately respond to an inquiry from The Daily Signal about a response to Cruz’s letter.

Carlson’s early criticism was of President Joe Biden’s promoting of flight suits for pregnant women last Monday during an International Women’s Day event at the White House in which he touted the promotion of two female officers. During the same event, Biden appeared to forget Austin’s name.

The senior enlisted leader of Space Command, Master Gunnery Sgt. Scott Stalker, tweeted a response to Carlson, dismissing the commentator’s criticism as “drama TV,” noting that Carlson’s views are based on “exactly zero days of service,” and adding that “we value women in the armed forces.”

In his news briefing Thursday, Kirby said of Carlson’s remarks: “What we absolutely won’t do is take personnel advice from a talk show host or the Chinese military.”

“I want to be very clear right up front that the diversity of our military is one of our greatest strengths,” Kirby said. “I’ve seen it for myself in long months at sea and in the combat waged by our troops in Iraq and Afghanistan. I’ve seen it up on Capitol Hill just this past month. And I see it every day here right at the Pentagon.”

Kirby referred to his own family.

“One of the best decisions I ever made was becoming a Navy spouse myself, married to a terrific young naval officer who gave birth to our first child, and then went right back to work doing civil engineering for an Air Force base in Jacksonville,” Kirby said.

Carlson responded on air Friday to the military’s objections, asking: “Since when does the Pentagon declare war on a domestic news operation? We can’t remember that ever happening.”

“The Department of Defense has never been more aggressively or openly political,” Carlson said, adding:

There are, at present, 2,500 American troops stationed in Afghanistan. They remain there to prevent the fall of Kabul to extremists. Simultaneously, there are 5,000 troops in our own Capitol, also as protection against ‘extremists,’ meaning people who voted for the losing candidate in the last election. Judging by those numbers, the Pentagon is twice as focused on controlling our own citizens as it is on controlling the Taliban.