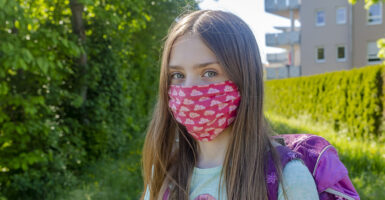 In the 365 days of 2018, a total of 911 children who would never reach their 15th birthday were murdered in this country. (Photo: lacaosa/Getty Images)

American children 14 years and younger are more likely to be murdered than to die because of COVID-19, according to data published by the Centers for Disease Control and Prevention.

On Jan. 12, the federal agency’s National Center for Health Statistics published its final report on the death data for the United States in 2018.

It revealed that an evil, long-standing trend was continuing in this country. In 2018, according to Table 6 in the report, 269 American children who were less than 1 year old died as victims of homicide.

In the 365 days of 2018, a total of 911 children who would never reach their 15th birthday were murdered in this country.

Had the major television networks and newspapers been inclined to treat this pandemic of child murder as a major story, they could have led with it every day—telling the stories of the young and innocent victims, revealing the facts about those who murdered them, and following the actions of the law enforcement officers and prosecutors responsible for bringing those murderers to justice.

These 911 murdered children were not some abstract statistic. They were human beings—at the beginning of their lives.

On Feb. 29, 2020, the Centers for Disease Control and Prevention reported the first COVID-19 death in the United States. More than a year has passed since then. How many American children have died from this disease?

As of March 10, according to the latest data published by the Centers for Disease Control and Prevention, COVID-19 has tragically taken the lives of 507,227 people in the United States. Of these, 216 have been 17 or younger.

This is a disease that has inflicted its greatest toll on older people. Among Americans 65 and older, according to the Centers for Disease Control and Prevention, 410,192 had died of COVID-19 as of March 10. Their tragic deaths accounted for 80.8% of the nation’s total as of that date.

As more Americans get vaccinated, this nation will defeat the COVID-19 pandemic—and Americans should be profoundly grateful to the scientists and medical professionals who have made this possible.

But will we defeat the murder pandemic that kills more children than COVID-19?

In the 22 years from 1997 through 2018, according to the numbers published in the Centers for Disease Control and Prevention’s annual death reports, 22,405 American children under the age of 15 have died as victims of a homicide. That is an average of more than 1,000 per year.

Americans, according to the Centers for Disease Control and Prevention, saw an increasing life expectancy in 2018. “Life expectancy for the total population,” said its report, “increased 0.1 year from 78.6 in 2017 to 78.7 in 2018.”

Why was this the case? It was because America was defeating some deadly diseases and injuries and—for some age groups—diminishing homicides.

“The increase in life expectancy at birth for the total population in 2018 was mainly due to decreases in mortality from cancer, unintentional injuries, chronic lower respiratory diseases, heart disease, and homicide,” said the Centers for Disease Control and Prevention’s report.

The fact that homicide is a leading cause of death for young Americans, including newborn babies and toddlers, is not a medical crisis. It is a moral crisis.

Manifestly—and horrifically—respect for innocent life, which sits at the foundation of freedom itself, has eroded in this country.

Now, as much as ever, we need political and cultural leaders who will act rationally and morally to protect innocent lives, not destroy them—and inspire others to do the same.