FDA May Make Too Many Pizza Toppings a Crime 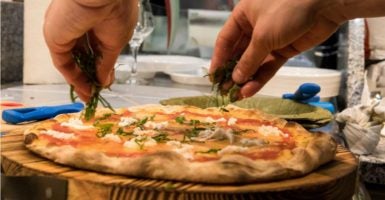 Restaurants could be held criminally liable if their food items do not match up with nutritional descriptions on their menus. (Photo: Sina Schuldt/dpa /picture-alliance/Newscom)

Jenny Craig can’t arrest you if you miscount your calories, but the federal government could if a new calorie-counting rule takes effect.

The U.S. Food and Drug Administration’s “Nutrition Labeling of Standard Menu Items in Restaurants and Similar Retail Food Establishments” (79 FR 71155) rule was originally scheduled to take effect on May 5. The FDA has now delayed the rule for a year.

The 105-page rule would implement Obama-era amendments to the Federal Food, Drug, and Cosmetic Act (FD&C Act), which sets national standards for the marketing and labeling of food products.

The rule would require, among other mandates, that all restaurants and other retail food outlets, such as movie theaters, operating as one brand with at least 20 stores display a calorie count in addition to other nutritional information for all standard menu items on the establishment’s “menus and menu boards.”

To demonstrate the potential scope of that provision, Domino’s Pizza executive vice president, Lynn Liddle, said, “‘Menu’ can refer to any writing that [is] ‘used by a customer to make an order selection at the time the customer is viewing the writing’”–possibly including flyers and other advertisements.

“We no longer know what a menu is,” Liddle said, to point out how confusing the rule is.

When an executive of a major national corporation can no longer ascertain the meaning of the word “menu,” a rule has problems.

During the rule’s notice-and-comment period, some food purveyors raised concerns “that restaurants that ‘unwittingly misbrand their menu offerings’ will be held liable for their food that is misbranded under this rule and related provisions of the FD&C Act.”

The FD&C Act makes misbranding a criminal offense punishable by imprisonment up to one year and a fine of up to $1,000, with more severe sanctions for repeat offenses (21 U.S.C. § 333).

Industry representatives also pointed out that restaurant owners and supervisors can be held criminally liable for FD&C Act violations under the so-called “responsible corporate officer doctrine.”

That stems from a U.S. Supreme Court case, United States v. Park (1975), in which the Court upheld a retail food chain president’s criminal conviction for food safety violations that occurred on his watch.

Chris Reisch, a Domino’s franchise owner in Kentucky who started out as a delivery man, explained, according to the Washington Free Beacon, “To face one year in prison for putting too many pepperonis on a pizza? Everybody laughs and smiles, but that’s the reality of the way it’s written now.”

As if extra pepperonis wouldn’t be a welcome surprise.

If the rule eventually goes into effect, it would require pizza providers to display calorie counts on a per serving (slice) basis, which poses a particular problem for proprietors who offer customers significant choice on their regular menu.

Domino’s, for instance, offers customers a selection of 27 regular toppings and nine sauces on five types of crust. All told, there are 34 million potential pizza combinations one could order from Domino’s.

Whether a customer adds double pepperoni or mushrooms to their customizable pie can make a significant difference in the calorie range of each pizza.

According to the American Pizza Community—a lobbyist group that advocates on behalf of 20,000 pizza restaurants nationwide—no two slices are alike. This creates significant variance in calorie estimates across pizzas.

Tim McIntyre, Domino’s Pizza executive vice president, said that if workers “are heavy handed with cheese or pepperoni, and a pizza doesn’t meet standards and is outside of the range of the nutritional labeling, then that could be a store manager liable for a criminal penalty. And that’s absolutely ridiculous.”

Expecting the rule’s implementation to be imminent, certain chains—including McDonald’s, Starbucks Coffee, and Panera Bread—had already commenced compliance by posting calorie counts on their menu boards, but those restaurants maintain a menu with less potential for customization.

A bipartisan coalition led by Sen. Roy Blunt, R-Mo., recently introduced a compromise bill to meet the FDA’s objective that consumers know how many calories are in each menu item without placing an unnecessary burden on businesses.

The Common Sense Nutrition Disclosure Act of 2017 sets forth a modified rule that includes flexibility for “establishments with standard menu items that come in different flavors, varieties, or combinations.”

Under the alternative act, restaurants where the majority of customers place their orders off-premises (online or over the phone) are allowed to disclose nutritional information online.

This compromise bill saves pizza shop owners from making up to $5,000 in menu board alterations per store and provides consumers with nutritional information in a much more accessible format. Domino’s, which takes 90 percent of its orders off-premises, already has a “Cal-O-Meter” available online that can quickly calculate the expected calorie count for any of its 34 million menu offerings.

Leave it to big government to impose an arbitrary regulation where industry has already developed a more efficient solution.

The calorie rule does not only affect pizza shops.

According to the Free Beacon:

Associations representing grocery stores and gas stations say the FDA does not even know what the regulation requires, including whether a store could face criminal penalties for serving different sizes of fried chicken.

In 1892, the Supreme Court issued its opinion in United States v. Eaton, which involved a challenge to a criminal indictment under the Oleomargarine Act, which imposed record keeping and tax burdens on oleomargarine dealers.

There, the Court reasoned that “a sufficient statutory authority should exist for declaring any act or omission a criminal offense.”

The Court recognized that federal regulations may have the force of law, but if federal bureaucrats want to throw people in jail for things like faulty butter records or too many anchovies on a pizza slice, Congress must have expressed a clear intention to criminalize such a trivial act or omission.

As Heritage Foundation scholars have written elsewhere, many arcane regulations carry criminal penalties. It is also clear, as the Supreme Court held in United States v. Grimaud (1911), “that Congress may establish criminal penalties ‘for violations of regulations’ made by administrative agencies.”

But applying the wisdom of the Eaton decision today, if Congress wants to make it a crime to fail to post calorie information on a menu board, it should say so. Such a significant determination should not be left to the FDA.

If the FDA does not curtail the scope of the rule during this one-year delay period, Congress will need to act before it threatens pizza shop owners and similarly-situated restaurant chains with criminal penalties for the failure to count calories according to the agency’s preferred standards.

The FDA may want people to eat healthier at restaurants, but it is not their role to send restaurateurs to the brig for unwitting recipe mishaps, nor is a regulatory requirement the proper means to intervene in Americans’ dietary choices.

Note: This article was updated in light of the FDA’s decision to delay the rule for one year.