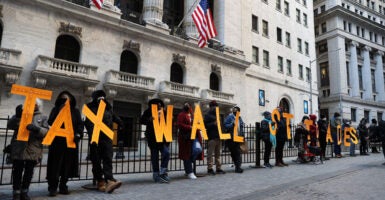 Massive deficit spending and a shift toward socialist policies in the U.S. does not bode well for the fiscal health of the nation. Pictured: A group of demonstrators gather by the New York Stock Exchange building with “Tax Wall Street” signs on Jan. 28. (Photo: Tayfun Coskun/Anadolu Agency/Getty Images)

Charles Payne of the Fox Business Network sat down with Jack Spencer, vice president of the Institute for Economic Freedom at The Heritage Foundation, to discuss the revealing—and alarming—key points from the 2021 Index of Economic Freedom at the index’s launch event Thursday.

The index shows that the United States suffered a large setback in economic freedom last year, primarily because of a steep drop in fiscal health due to the ballooning federal deficit.

Unfortunately, Payne does not see the fiscal restraint that is needed happening until America “go[es] over the proverbial cliff, [comes] out of the ashes,” and learns the hard way.

On the other hand, Payne described himself as “a rose-colored glasses kind of guy,” and an optimist about America’s future. Pointing to his own inspirational story, and others as well, Payne noted that since the COVID-19 pandemic began, “The amount of new business applications has gone through the roof.” He attributes that to the entrepreneurial drive and spirit of Generations Y and Z.

For Payne, the U.S. is still the “land of opportunity.”

Speaking of socialism, Payne acknowledged that it can sound “really good,” like “we all get a piece of the action and no one is richer than anyone else.” The reality is quite different, and one need only talk to immigrants to this country from other lands, according to Payne, to understand that many have come to America precisely to avoid the horrors of socialism they experienced in their homelands.

Asked about Wall Street, where Payne has made his mark, he decried the widespread negative mischaracterizations promoted by leftists. Focusing on the massive fortunes made by a few, they ignore the essential role of Wall Street as a place where financial transactions are facilitated and where companies raise money to expand and grow their businesses, allowing the people who work at those companies to achieve their potential and the American dream.

Speaking not just of Wall Street but of the American economic system as a whole, Payne concluded, “Sometimes you don’t know how good you have it until you throw it away.”

Sadly, according to this year’s index, the U.S. has moved a bit further down the road toward throwing it all away, falling to 20th out of 178 countries overall, its lowest ranking ever.