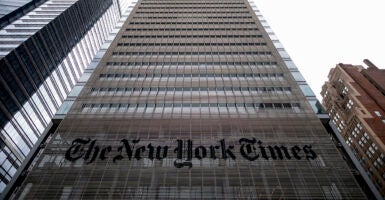 This Kennedy descendant insists in her New York Times Book Review that "How to Blow Up a Pipeline" doesn't offer "any actual instructions" for explosions. Pictured: The New York Times building seen on June 30, 2020, in New York City. (Photo: Johannes Eisele/AFP/Getty Images)

If the name Tatiana Schlossberg sounds like a brand for white privilege, you would be right. She’s not a top chef or fashion designer. She’s the 30-year-old daughter of Caroline Kennedy and Ed Schlossberg, the granddaughter of former President John F. Kennedy.

Like Maria Shriver at NBC News, Tatiana Schlossberg became an “objective journalist” for a while, covering the environment for The New York Times from 2014 to 2017.

When she wrote a book in 2019 called “Inconspicuous Consumption,” NBC put her on TV and pushed her to run for office. She deferred, saying she is a journalist … a political activist of a different stripe.

On Jan. 24, she reviewed three books on “environmental disaster” for The New York Times Book Review. One book had an especially provocative title: “How to Blow Up a Pipeline,” by a far-left Swedish professor named Andreas Malm. It was published on Jan. 5 by Verso Books, which calls itself “the largest independent, radical publishing house in the English-speaking world.”

That was one day before the terrible, violent riot on Capitol Hill.

Verso’s promotional blurb for this latest version of a Unabomber treatise is really something.

“In this lyrical manifesto, noted climate scholar (and saboteur of SUV tires and coal mines) Andreas Malm makes an impassioned call for the climate movement to escalate its tactics in the face of ecological collapse,” it says. “We need, he argues, to force fossil fuel extraction to stop—with our actions, with our bodies, and by defusing and destroying its tools. We need, in short, to start blowing up some oil pipelines.”

It seems intellectually incoherent for The New York Times to cheer social media platforms for squashing voices that promoted conspiracy theories about Donald Trump’s “landslide victory” because they might lead to violence … and then offer space to a book advocating property destruction.

Online, the Times promoted it with the headline “Three Books Offer New Ways to Think About Environmental Disaster.” When it comes to Big Energy (as opposed to Big Government), a few pipeline bombs offer “new ways to think,” an expansion of our ecological possibilities.

Schlossberg calls it “a compelling but frustrating treatise.” She says, “one of the most satisfying parts of his book comes when he brutally dispatches with ‘climate fatalists.'” (Perhaps when reviewing a book that endorses blowing stuff up, the words “brutally” and “dispatches” should be avoided.)

She loves how Malm writes that “climate fatalism is for those on top.” But here’s the poster girl for white privilege, a roving global correspondent born “on top,” promoting violence against energy companies, which provide jobs to Americans in flyover states much less privileged than she is.

This Kennedy descendant insists Malm doesn’t offer “any actual instructions” for explosions. She concludes, “the problem with violence, even if it’s meant only to destroy ‘fossil capital,’ is that ultimately it’s impossible to control.” That’s true.

Philosophically, one can ask whether it would be advisable or appropriate to publish a book titled “How to Blow Up a Book Publisher.” Did Verso Books ever consider that, or whether someone who’s hurt (or whose family members are killed) in a pipeline explosion could sue for damages?

And shouldn’t President Joe Biden’s Department of Homeland Security broaden its focus on “domestic terrorism” from merely the far right to the far left? The left’s attempt to place the entire terrorism narrative on the right is completely undermined by its promotion of noxious books like this.