New York Times and FedEx: You’re Invited to Heritage for a Tax Debate 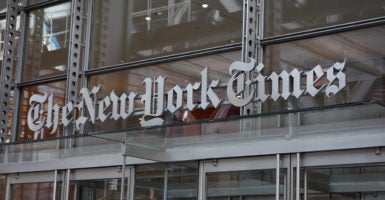 "The Times’ narrative is misleading if readers don’t fully understand how corporate taxes are calculated and why," writes Adam Michel. (Photo: Don Emmert/AFP via Getty Images)

Last weekend, FedEx became the latest company to face criticism from The New York Times for paying little or nothing in income taxes.

The Times’ reporting highlights the complexity of who ultimately bears the corporate tax burden and what that means for American workers.

Following the Sunday report, Frederick W. Smith, chairman and CEO of FedEx, disputed the accuracy of the story, and highlighted the importance of business investment for economic growth and the misleading nature of reporting on isolated annual income tax payments.

Smith challenged “A.G. Sulzberger, publisher of the New York Times, and the business section editor to a public debate in Washington, D.C.,” to discuss “federal tax policy and the relative societal benefits of business investments and the enormous intended benefits to the United States economy, especially lower and middle class wage earners.”

Well, let’s have the debate.

The Heritage Foundation invites the Times and FedEx to our headquarters in Washington, D.C., for this discussion on corporate taxes, the effects of the 2017 Tax Cuts and Jobs Act, and the economic benefits being enjoyed by American workers.

In the spirit of public understanding, we welcome a co-hosting organization, critical of the benefits of the 2017 tax cuts, to join us putting on this event.

In the meantime, let’s get back to why The New York Times’ critique of FedEx and the 2017 tax cuts doesn’t add up.

The Times uses FedEx as an example to support its claim that the tax cuts amounted primarily to a “windfall” for large corporations and investors. It claimed FedEx paid no taxes in 2018 and highlighted recently slow economy-wide investment trends following the 2017 tax cuts.

It’s misleading to look at just one year of business taxes paid, particularly one immediately following the tax cuts, and despite the claims, investment increased significantly following the reforms, although trade uncertainly has dragged it back down.

When the economy is humming, as it is today, it is lower-income and middle-class Americans who benefit the most from rising wages, low unemployment, and plentiful job opportunities. Pro-growth policies that support a healthy economy benefit workers the most.

The Times’ narrative is misleading if readers don’t fully understand how corporate taxes are calculated and why.

Our business tax system intentionally taxes profits as to not discourage firms from hiring new workers or making new investments. Taxing profits means the system allows firms to deduct costs, such as wages, investments, rent, etc., from their revenues.

When a firm expands by hiring new employees, buying new delivery trucks, or growing warehouse capacity, paying no income tax in that year, as FedEx supposedly did, it shows the system working as planned. Businesses see future opportunities and reinvest would-be taxable profits back into their operations and workers.

Until tax reform, the tax code prohibited businesses from deducting the full cost of a new piece of equipment. Instead, they could only write off a fraction of the cost, spread out over a period of time set by the IRS.

The 2017 tax cuts allowed more investments to be fully “expensed,” which enabled businesses to immediately write off the full cost.

Historically, this type of reform leads businesses to increase new investments as the after-tax cost of buying that next truck or computer decreases. The result of the increased investment is a decrease in taxable profits in the immediate term.

Immediately following the reforms, business fixed investment, new business applications, and other indicators, such as business confidence, all surpassed expectations, although increasing trade uncertainty and new tariffs in the following year dragged investment back down below pre-tax reform projections.

It is thus reasonable to conclude the economic costs of the trade war could have been much worse without the offsetting domestic tax cuts.

The tax cuts and reforms also were not intended to be a one-time or immediate stimulus. Expensing and lower tax rates are structural reforms, designed to increase investment across the U.S. economy, drive productivity gains, and increase wages over the long run.

In such a turbulent policy environment, assessing the success of tax reform will take time as new investment and increased productivity do not happen instantaneously.

The Times’ story, and Smith’s reaction, highlight the need for a more thorough understanding of how to honestly evaluate business taxes and their impact on American workers. We welcome the opportunity to continue to shed light on this topic by facilitating further discussions.