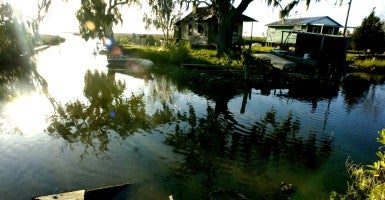 The New York Times has declared the first American climate refugees. The article, published on May 2, tells the story of families living in southeastern Louisiana on the Isle de Jean Charles who will have to relocate (apparently due to man-made climate change).

The article begins by warning that, “Around the globe, governments are confronting the reality that as human-caused climate change warms the planet, rising sea levels, stronger storms, increased flooding, harsher droughts and dwindling freshwater supplies could drive the world’s most vulnerable people from their homes.”

There’s a big problem, however, with this claim.

For starters, the Intergovernmental Panel on Climate Change, the main body in which global warming regulators rely on for their science, dispels the notion that hurricanes are becoming more frequent. The panel found evidence for increases, decreases, and no trend at all in flood activity or severity. As for droughts, the panel noted that its previous conclusions about increasing trends were overstated and that “the compelling arguments both for and against a significant increase in the land area experiencing drought has hampered global assessment.”

But the fact that natural climate change would occur with or without any type of human activity isn’t as a compelling story. It’s not until later in the article that The New York Times gets to one of the real reasons Isle de Jean Charles is disappearing:

Channels cut by loggers and oil companies eroded much of the island, and decades of flood control efforts have kept once free-flowing rivers from replenishing the wetlands’ sediments.

There’s quite a difference between man-caused coastal erosion and man-caused global warming.

But don’t worry, taxpayers will be responsible for the relocation of so-called climate refugees. The article explains that, “the Department of Housing and Urban Development announced grants totaling $1 billion in 13 states to help communities adapt to climate change.”

The federal government, on the other hand, is responsible for a different kind of “refugee”: climate policy refugees. Bureaucrats in Washington, D.C., are also enacting global warming regulations that will unnecessarily displace hard-working Americans from their jobs. The Obama administration’s war on coal is decimating mining towns, forcing coal-fired power plants to shutter and bankrupting energy companies.

Climate regulations that drive up the cost of energy would destroy more than 400,000 jobs, half of which would be lost in the energy-intensive manufacturing sector.

And the regulations aren’t going to do a thing to prevent the relocation of any so-called climate refugees, whether global warming is man-induced or not. The United States could effectively shut down the entire economy and eliminate all carbon dioxide emissions and still only moderate warming by only 0.137 degree Celsius by 2100.

The federal government’s global warming regulations will result in a significant amount of employment refugees. It’s easy for the left to use every climate-related story (a hurricane, coastal erosion, a heat wave) to justify action on global warming. But the facts don’t bear out.