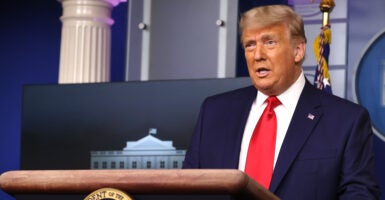 In a farewell address on his last full day in office, President Donald Trump defended free speech, wished “luck” to his successor, and thanked his vice president, whom he has criticized in recent weeks.

As with other outgoing presidents, Trump talked in his videotaped message, released Tuesday afternoon, about the achievements of his administration as he prepared to leave the White House early Wednesday without attending the noon inauguration of Joe Biden as the nation’s 46th president.

Weeks after a fiercely disputed election, Trump talked about the need for Americans to unite behind a common set of values. His comments come as many on the left push to silence dissenting viewpoints.

“At the center of this heritage is also a robust belief in free expression, free speech, and open debate,” Trump said, adding:

Only if we forget who we are, and how we got here, could we ever allow political censorship and blacklisting to take place in America.

It’s not even thinkable. Shutting down free and open debate violates our core values and most enduring traditions. In America, we don’t insist on absolute conformity or enforce rigid orthodoxies and punitive speech codes. We just don’t do that.

America is not a timid nation of tame souls who need to be sheltered and protected from those with whom we disagree. That’s not who we are. It will never be who we are.

After contesting the November election for weeks, Trump acknowledged that a new administration is about to begin. However, he didn’t mention Biden by name.

“This week, we inaugurate a new administration and pray for its success in keeping America safe and prosperous,” Trump said. “We extend our best wishes, and we also want them to have luck, a very important word.”

It was not clear what the president referred to in the mention of luck.

Trump also made a reference to the Jan. 6 riot at the Capitol, which led to the House of Representatives’ impeaching him last week for “incitement to insurrection”:

All Americans were horrified by the assault on our Capitol. Political violence is an attack on everything we cherish as Americans. It can never be tolerated. Now more than ever, we must unify around our shared values and rise above the partisan rancor and forge our common destiny.

Trump and some of his lawyers asserted Jan. 6 that Vice President Mike Pence, in his role as president of the Senate, had the authority to not count electoral votes from some states if the election results there were in question.

When Pence did not follow the president’s apparent order, Trump attacked him on Twitter. Some rioters chanted, “Hang Mike Pence.”

In a section of the farewell in which he expressed gratitude to  family members, staff, Secret Service, and the military, Trump said: “I also want to thank Vice President Mike Pence, his wonderful wife Karen, and the entire Pence family.”

“I came to Washington as the only true outsider ever to win the presidency,” he said.

The outsider status, the president said, brought a different perspective than that of politicians who held the office before him:

Above all, we have reasserted the sacred idea that, in America, the government answers to the people. Our guiding light, our North Star, our unwavering conviction has been that we are here to serve the noble, everyday citizens of America. Our allegiance is not to the special interests, corporations, or global entities; it’s to our children, our citizens, and to our nation itself.

Trump hailed achieving the tax reform package passed by Congress in 2017; rolling back regulations; forging new trade deals, including the U.S.-Mexico-Canada Agreement to replace the North American Free Trade Agreement; pulling the United States out of the Paris accord on climate change; and creating the Space Force.

He also mentioned his appointment of three Supreme Court justices who pledged to interpret the Constitution as written.

“As a result of our bold diplomacy and principled realism, we achieved a series of historic peace deals in the Middle East. Nobody believed it could happen,” the president said. “The Abraham Accords opened the doors to a future of peace and harmony, not violence and bloodshed. It is the dawn of a new Middle East, and we are bringing our soldiers home. … I am especially proud to be the first president in decades who has started no new wars.”

Trump said his tariffs on China forced a new trade deal with the communist regime. He also noted that the booming U.S. economy reversed after COVID-19 spread from Wuhan, China, across the world.

“Before the ink was even dry, we and the whole world got hit with the China virus,” Trump said. “Our trade relationship was rapidly changing, billions and billions of dollars were pouring into the U.S., but the virus forced us to go in a different direction.”

In response, he noted, the U.S. pushed new vaccines to combat the deadly new coronavirus that causes COVID-19:

When our nation was hit with the terrible pandemic, we produced not one, but two vaccines with record-breaking speed, and more will quickly follow. They said it couldn’t be done, but we did it. They call it a medical miracle. … Another administration would have taken three, four, five, maybe even up to 10 years to develop a vaccine. We did it in nine months. We grieve for every life lost, and we pledge in their memory to wipe out this horrible pandemic once and for all.