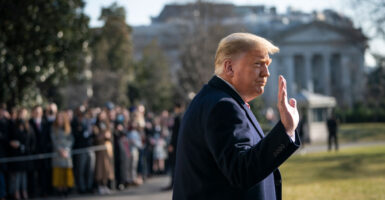 The Republican Party should give a full-throated condemnation of the unacceptable actions of Jan. 6, and it should call upon the president to ensure a peaceful transfer of power. Pictured: President Donald Trump makes his first public appearance since the Capitol riot on Jan. 12 with a trip to the town of Alamo, Texas, to view the construction of the wall along the U.S.-Mexico border. (Photo: Drew Angerer/Getty Images)

On Jan. 6, I saw with my own eyes the breakdown of our society and our democracy. It was sickening, outrageous, 100% unacceptable, illegal, immoral, and unpatriotic. And it will be the moment that defines the Trump presidency and finally spurs the Republican Party to stand up to him.

The Capitol building is the physical representation of our republic. It was defaced, degraded, and disgraced by a mob of thugs who used physical force to overrun law enforcement and attempted to use political terrorism to thwart the democratic process. This cannot and must not stand.

As a result of this unprecedented moment, social media companies such as Twitter and Facebook, the latter of which includes Instagram, have removed President Donald Trump from their platforms, citing his language as having incited the incident at the Capitol.

Trump condemned the violence in a video on his now-suspended Twitter account, but that hasn’t stopped companies from ceasing all business with him. The PGA has stated it will no longer play at any Trump golf courses, and it’s possible more companies will soon follow suit.

Trump has to stop making false claims that the election was “stolen” or “rigged.” No credible evidence has been presented showing widespread fraud, and the fact that so many millions of people have bought into that fantasy is astounding.

Many have supported the president during his term and celebrated his accomplishments. But some concluded that his actions on Jan. 6 were simply unacceptable, as were many of his actions since the election.

To put the onus on the vice president was misguided. There was absolutely no constitutional basis for Vice President Mike Pence to overturn the will of the people and somehow reverse the election from the floor of the Senate on Jan. 6. All 50 states have certified the election. It is finally over, and President-elect Joe Biden will be our next commander in chief.

Threatening the vice president in remarks at the rally in Washington was beyond the pale. The rhetoric at his event in the hours leading up to the insurrection was dangerous, and the events of Jan. 6 proved that.

“If you are the zero and not the hero, then we will be coming for you,” the younger Trump continued, pledging to run primary opponents against Republicans not willing to advocate for overturning the election results.

That type of language threw gasoline on a fire that Trump has been stoking since the election. He has done it repeatedly by denying the legitimacy of the vote and by refusing to concede.

And, incredibly, in the moments after violence erupted on Capitol Hill, the president failed to make any attempt at unifying the country or denouncing the protesters unequivocally. Instead, he chose to repeat falsehoods and create an us-versus-them dynamic by saying he sympathized with the marauders and that the election was stolen and he won a “landslide” victory.

The Republican Party has been willing to give Trump a wide berth, refusing to be openly critical of him. Only a handful of Republican elected officials have been willing to break with him publicly. Will Jan. 6 prove to be the moment when the GOP drew a clear line to separate itself from the president?

Only time will tell. But my heart breaks for this country. What I witnessed on Jan. 6 was astonishing: Capitol Police officers fleeing from angry mobs inside the Capitol. Fire extinguishers being yanked and used as weapons against them. Other officers being overrun by violent protesters inside the Capitol as tear gas hung in the air and blows were exchanged.

Guns being drawn inside the Capitol and on the floor of the House as protesters attempted to enter the locked doors of the chamber will define Jan. 6. So will images of haughty invaders standing at the speaker’s podium and with their feet on the desks of legislators, who were forced to flee for their lives and huddle in a secure area.

A woman was shot dead, a Capitol Police officer died of wounds from the protesters, and another officer committed suicide. Blood was spilled in the capital of our nation—inside the very buildings where we expect our elected officials to debate with words and not violence.

Trump should not be expressing his love for those who besmirched our country. He is supposed to be conducting himself as the president of all Americans, not just those who adore him.

Finally, after much urging, he condemned the tragic events of Jan. 6.

Now is the time to put the interests of our nation and its citizens first. An end to the divisive rhetoric is what is needed by Trump.

The Republican Party should give a full-throated condemnation of the unacceptable actions of Jan. 6, and it should call upon the president to ensure a peaceful transfer of power.

I pray that the events of Jan. 6 may be the first step in changing the tone of debate in this country. We are our brother’s keepers—and not enemies. As President Abraham Lincoln correctly said, “A house divided against itself cannot stand.”

And we as Americans must stand together.