America Cannot Be Great Until We Make America Good Again 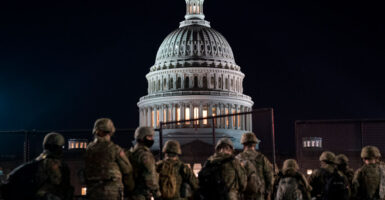 The violence in which the sacred ground of our nation's Capitol building was violated by unruly hooligans, resulting in the death of five, is a low point in our history. Pictured: Members of the National Guard gather outside the U.S. Capitol on Jan. 12. (Photo: Stefani Reynolds/Getty Images)

There seems to be only one area of common ground in America today: agreement that something is wrong.

But regarding what that “something” is, and what we need to do, there is profound disagreement throughout the nation.

The violence in which the sacred ground of our nation’s Capitol building was violated by unruly hooligans, resulting in the death of five, is a low point in our history.

Clearly, something is wrong. But we won’t be able to fix it until we define it correctly.

Those on the right are entirely correct that the tone of violence, chaos, and nihilism was set by the left.

Our cities and institutions have been vandalized and looted with impunity by the Black Lives Matter and Antifa movements over the last several years, receiving support and endorsement by Democratic Party leaders and, sadly, many business leaders.

After a violent mob pulled down a statue of Christopher Columbus in Baltimore, a journalist asked House Speaker Nancy Pelosi, “Shouldn’t that be done by a commission or the city council, not a mob in the middle of the night throwing it into the harbor?”

Pelosi’s response: “People will do what they do.”

The speaker tore up, for all to see on international television, the president’s State of the Union address after he finished discharging that constitutionally directed duty.

It’s the absolute secularization of the nation, the purge of the Almighty from our public life, the crowning politicians king of the universe, that is destroying us.

Our democratic republic, our freedom, is vital. But with no absolutes, it deteriorates to chaos.

It is why President Abraham Lincoln refused to let the issue of the spread of slavery be submitted to democracy. There must be absolutes that precede politics.

It is the Ten Commandments where we learn that murder and theft are forbidden. When life and property are turned over to politics, the result is the chaos we now see.

The nation’s high court, in many bad decisions over the last century, has undermined our Constitution as a limiting factor on federal government power. But the critical moment of detaching the nation as a free nation under God occurred in 1973, in the Roe v. Wade decision that legalized abortion. The federal government took charge of defining life and giving women license to destroy it.

Then, in 2015, in the Obergefell v. Hodges decision, government seized the authority to define, or redefine, the sacred institution of marriage.

President Donald Trump had a successful presidency in his effort to “Make America Great Again.”

A powerful economy was restored and has sustained us through the COVID-19 crisis. Our courts are now filled with principled, conservative judges. The United States led the way to recognize Jerusalem as the capital of Israel, and a new, unbelievable peace has been achieved in the Middle East.

But America cannot be great if America, as Alexis de Tocqueville said, is not good.

Trump now has an opportunity to sign off on a powerful note that will totally change the tenor that Democrats want to set.

He cannot control Democrats’ ability to politicize events and impeach him. But, if they do it, he can take control by resigning.

He can take the high, high ground, in contrast to their low, low ground. He can take responsibility for the horror that just occurred at the Capitol, because it occurred on his watch. And he can use the opportunity to declare that America must be a free nation under God, and that this is the great challenge that faces us going forward.

He can turn the reins of leadership, in these waning days, to Vice President Mike Pence, an upright Christian man and American patriot who could speak truth to the nation as the unruly Democratic mob takes charge and begins its long campaign to drag our nation into the abyss.