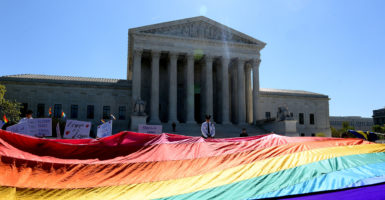 The debate in the United States in the decade and a half before Obergefell v. Hodges wasn’t about equality. It was about marriage. We disagreed about what marriage is.

Of course, “marriage equality” was a great slogan. It fit on a bumper sticker. You could make a red equal sign your Facebook profile picture. It was a wonderful piece of advertising.

And yet it’s completely vacuous. It doesn’t say a thing about what marriage is. Only if you know what marriage is can you then decide whether any given marriage policy violates marriage equality.

Before you can get to considerations of equal protection of the law, you have to know what it is the law is trying to protect equally.

Every law makes distinctions. Equality before the law protects citizens from arbitrary distinctions, from laws that treat them differently for no good reason.

To know whether a law makes the right distinctions, whether the lines it draws are justified, one has to know the public purpose of the law and the nature of the good it advances or protects.

After all, even those who want to redefine marriage to include same-sex couples will draw lines defining what sorts of relationships are a marriage and what sorts are not.

That’s why Sherif Girgis, Robert P. George, and I wrote a book a few years ago titled “What Is Marriage?” You have to answer that question before you talk about recognizing marriage equally.

And yet implicit throughout the court’s opinion redefining marriage in Obergefell is the assumption marriage is a genderless institution.

But as Justice Samuel Alito pointed out two years earlier in his dissenting opinion in the Defense of Marriage Act case, the Constitution is silent about what marriage is. Alito framed the debate as a contest between two visions of marriage—what he calls the “conjugal” and “consent-based” views.

Alito cited the book I co-authored as an example of the conjugal view of marriage: a “comprehensive, exclusive, permanent union that is intrinsically ordered to producing new life.” On the other side, he cited Jonathan Rauch as a proponent of the consent-based idea that marriage is a commitment marked by emotional union.

The Constitution, he explained, is silent on which of these substantive visions of marriage is correct. Alito, of course, was right about the Constitution.

But were there ever any reasonable grounds for this debate in the first place?

The consent-based view of marriage is primarily about an intense emotional union: a romantic, caregiving union of consenting adults. It is what the philosopher John Corvino describes as the relationship that establishes your “number one person.”

What sets marriage apart from other relationships is the priority of the relationship. It’s your most important relationship; the most intense emotional, romantic union; the caregiving relationship that takes priority over all others.

Andrew Sullivan says marriage has become “primarily a way in which two adults affirm their emotional commitment to one another.” This vision of what marriage is does all the work in Justice Anthony Kennedy’s majority opinion in Obergefell.

In “What Is Marriage?,” my co-authors and I argue this view collapses marriage into companionship in general. Rather than understanding marriage correctly as different in kind from other relationships, the consent-based view sees in it only a difference of degree: Marriage has what all other relationships have, but more of it.

This, we argue, gets marriage wrong. It cannot explain or justify any of the distinctive commitments marriage requires—monogamy, exclusivity, and permanence—nor can it explain what interest the government has in it.

If marriage is simply about consenting adult romance and caregiving, why should it be permanent?

Emotions come and go; love waxes and wanes. Why would such a bond require a pledge of permanency? Might not someone find the romance and caregiving of marriage enhanced by a temporary commitment, in which no one is under a life sentence?

In fact, if marriage is simply about consenting adult romance and caregiving, why should it be a sexually exclusive union?

Sure, some people might prefer to sleep only with their spouse, but others might think agreeing to have extramarital sexual outlets would enhance their marriage. Why impose the expectation of sexual fidelity?

Lastly, if marriage is simply about consenting adult romance and caregiving, why can’t three, four, or more people form a marriage?

There is nothing about intense emotional unions limiting them to two and only two people. Threesomes and foursomes can form an intense emotional, romantic, caregiving relationship as easily as a couple.

The consent-based view of what marriage is simply fails as a theory of marriage because it cannot explain any of the historical marital norms.

A couple informed by the consent-based view might live out these norms if temperament or taste so moved them, but there would be no reason of principle for them to do so and no basis for the law to encourage them to do so.

Marriage can come in as many different sizes and shapes as consenting adults can dream up. Love equals love, after all.

And why, in any case, should the government have any involvement in this kind of marriage?

If marriage is just about the love lives of consenting adults, let’s get the state out of their bedrooms. And yet those who supported the redefinition of marriage wanted to put the government into more bedrooms.

There is nothing “homosexual” or “gay” or “lesbian,” of course, about the consent-based view of marriage. Many heterosexuals have bought into it over the past 50 years. This is the vision of marriage from the sexual revolution.

Long before there was a debate about same-sex anything, heterosexuals bought into a liberal ideology about sexuality that makes a mess of marriage: Cohabitation, no-fault divorce, extramarital sex, non-marital childbearing, pornography, and the hook-up culture all contributed to the breakdown of the marriage culture.

If the sexual habits of the past 50 years have been good for society, good for women, good for children, then by all means it’s reasonable to enshrine the consent-based view of marriage in law.

But, if the past 50 years have not been so good for society, for women, for children, indeed, if they have been, for many people, a disaster, why would we lock in a view of marriage that will make it more difficult to recover a more humane vision of human sexuality and family life?

The law cannot be neutral between the consent-based and conjugal views of marriage. It will enshrine one view or the other.

It will either teach marriage as consenting adult love of whatever size or shape the adults choose, or it will teach marriage as a comprehensive union of sexually complementary spouses who live by the norms of monogamy, exclusivity, and permanency, so children can be raised by their mom and dad.

There is no third option. There is no neutral position. The law will embrace one or the other.

This piece originally attributed this excerpt to the wrong book. It is drawn with permission from Ryan T. Anderson’s chapter in “Life, Marriage and Religious Liberty: What Belongs to God, What Belongs to Caesar,” edited by John Stonestreet and David Dockery.