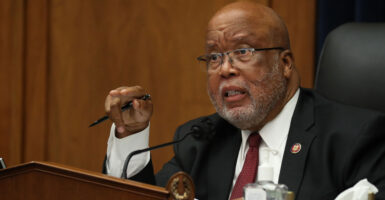 The chairman of the Committee on Homeland Security, Rep. Bennie Thompson, D-Miss., on Thursday urged the Transportation Security Administration and the FBI to place certain members of the Capitol mob on the no-fly list.

“Given the heinous domestic terrorist attack on the U.S. Capitol yesterday, I am urging the Transportation Security Administration [TSA] and the Federal Bureau of Investigation [FBI] to use their authorities to add the names of all identified individuals involved in the attack to the federal No-Fly List and keep them off planes,” Thompson said in a press release.

“This should include all individuals identified as having entered the Capitol building—an intrusion which threatened the safety of members of Congress and staff, and served as an attack on our Nation.”

Thousands of supporters of President Donald Trump on Wednesday swarmed law enforcement, broke down barricades, and eventually gained entry into the Capitol, ransacking the government building, video showed. At least 82 people were arrested during the unrest and five were pronounced dead, including one Capitol Police officer.

“We already saw reports of ‘unruly mobs’ in air on the way to Washington, D.C. It does not take much imagination to envision how they might act out on their way out of D.C. if allowed to fly unfettered,” Thompson added.

“This is an action that TSA and the FBI, by law, are able to take but, to my knowledge, have not yet taken. Alleged perpetrators of a domestic terrorist attack who have been identified by the FBI should be held accountable.”

“What we witnessed yesterday was not dissent, it was not disorder, it was not protest, it was chaos,” Biden said of the Trump rioters in a speech in Wilmington, Delaware. “They weren’t protesters. Don’t you dare call them protesters. They were a righteous mob, insurrectionists, domestic terrorists.”

Content created by The Daily Caller News Foundation is available without charge to any eligible news publisher that can provide a large audience. For licensing opportunities for this original content, email  licensing@dailycallernewsfoundation.org.