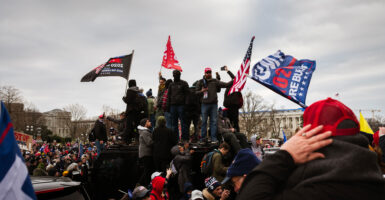 A group of pro-Trump protesters wave flags while standing on an armored police vehicle on the grounds of the Capitol Building on Jan. 6 in Washington. A mob stormed the Capitol, breaking windows and clashing with police officers. (Photo: Jon Cherry/Getty Images)

The FBI’s office in Washington, D.C., is seeking the public’s help to identify members of the pro-Trump mob that stormed the U.S. Capitol building on Wednesday.

“If you have witnessed unlawful violent actions, we urge you to submit any information, photos, or videos that could be relevant at fbi.gov/USCapitol,” the FBI page says.

The page provides a form to submit images and videos “related to possible violations of federal law committed.”

“Our goal is to preserve the public’s constitutional right to protest by protecting everyone from violence and other criminal activity.”

The protesters breached the Capitol following a round of speeches at the “Stop the Steal” rally attended by President Donald Trump, his son, and others. Trump claimed that he won the presidential election, but that it was stolen from him through voter fraud in several states.

Video footage shows Trump supporters scuffling with Capitol Police and breaking through security barriers. Members of Congress were in the process of verifying the election results when the first members of the mob broke into the Capitol. They were forced to shelter in their offices or evacuate the building during the intrusion.

Several protesters broke into the offices of members of Congress. In one photo, a man who identified himself to The New York Times as Richard Barnett was seen sitting at House Speaker Nancy Pelosi’s desk. Others were seen inside the Senate chambers posing for photos.

Ashli Babbit, a 14-year Air Force veteran, died after being shot inside the Capitol. Video showed Babbit with a group of Trump supporters attempting to enter a secured part of the Capitol building. A shot is heard in the video, and Babbit is seen falling backwards onto the floor. She was later pronounced dead.

Robert J. Contee, the chief of the Washington, D.C., police department, said at a late-night press conference on Wednesday that four people died during the melee, including Babbit. Three other people died from medical emergencies, he said.

Contee said that 52 people were arrested, including 26 on the grounds of the Capitol. Fourteen police officers were injured, and two undetonated pipe bombs were found at the headquarters of the Republican National Committee and Democratic National Committee, according to the police chief.