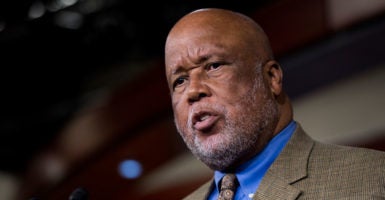 The chief of staff to Rep. Bennie Thompson spends his days in the halls of Congress and his weekends in jail for tax evasion, after the Mississippi Democrat violated his pledge to fire his wealthy chief if the aide was found guilty of stiffing the Treasury of $150,000.

Issac Lanier Avant made $170,000 a year in congressional pay, yet the court found he didn’t pay any taxes for seven years. Prosecutors said he was dishonest throughout their investigation, and when he did file tax returns, he lied about donating $50,000 to a religious group and tried to take a “bizarre” tax write-off for rollerblading. Prosecutors asked for a one-year prison term, but Avant was sentenced in January to a monthlong stint in jail followed by a year of weekends in jail.

Between 2008 and 2012, Avant didn’t have any federal income taxes withheld from his pay after, a U.S. Department of Justice release reads, “he caused a form to be filed with his employer that falsely claimed he was exempt from federal income taxes.”

Eight months into his weekends in jail, a grand jury indicted him on new charges: claiming he paid his taxes in order to get a top-secret clearance when he was the top Democratic staffer on the Committee on Homeland Security. Thompson hasn’t fired him because of that indictment, either.

Thompson is a consistent advocate for high government spending paid for by taxes on the wealthy, saying in a press release this month, “Republicans ensure the wealthy continue to thrive at the expense of others.”

“He’s charged and if he’s proven to be guilty then obviously that would be the result, but I’m not going to fire him now because he hasn’t had his day in court,” Thompson said in August 2016 of the original tax evasion charges.

A few months later, Avant pleaded guilty, yet Thompson quietly kept him on staff. Pay records show Avant took a month off in March, presumably while he was in prison.

In September 2015, after the IRS began garnishing his wages for failure to pay taxes, the Congressional Black Caucus Foundation gave Avant an award for “exemplary leadership,” an award Avant trotted out at sentencing. In trying to show Avant’s good character, his lawyer said he had volunteered for a charity 20 years ago.

Thompson is the ranking Democrat on the Committee on Homeland Security, and Avant served as both the committee’s Democratic staff director and his personal chief of staff. He stopped working for the committee two weeks after he was sentenced but retained his job as chief of staff.

Avant said on the background check application for the homeland security job in 2013 that he had filed his taxes, when in fact he had not. He could face five years in prison if found guilty of lying on these forms.

Avant answered his work phone Wednesday and told The Daily Caller News Foundation there was “no need to elaborate” on the situation. A representative for Thompson did not return a request for comment on the man charged with running his office.

“Avant’s cavalier attitude towards his legal duty to file and pay taxes, which extended from 2005 to the time he was interviewed by federal agents in 2015, is astonishing,” prosecutors wrote. “The extremely limited written statement Avant submitted to the U.S. Probation Officer as to his acceptance of responsibility is further evidence of this disconcerting view of the seriousness of his tax fraud.”

Avant told the judge he didn’t pay taxes because he couldn’t afford rent on his apartment. Other staffers in Thompson’s office made less than a quarter of Avant’s $170,000 a year salary.

“The chief of staff for a member of Congress, who oversees a staff of 19-22 congressional office employees and handles payroll issues, claimed” he didn’t know he had to file with the IRS, prosecutors wrote. “These statements defy credibility.”

They said he filed “a bizarre tax return” falsely claiming he donated $26,000 in cash to Catholic Charities, plus $22,000 worth of goods, including an oil painting and a coin collection.

“Avant stated that he did not know why the $26,000 donation to Catholic Charities and the $22,000 in non-cash charitable contributions are on his tax return. Avant also took outlandish miscellaneous deductions for biking, chess, bass guitar, and rollerblading. The tax return Avant filed with these ridiculous deductions resulted in an itemized deduction amount that all but wiped out his adjusted gross income and resulted in a claim that the tax owed by Avant was just $119.”

“One version of the draft tax return he prepared on April 15, 2008, had different deduction amounts for different items, and resulted in a tax due of $636. Despite no federal income tax withholdings, apparently that amount was too high for Avant,” and he revised it until it was even lower.