‘We Are Manufacturing Transgender Kids,’ Says Man Who Once Identified as Woman 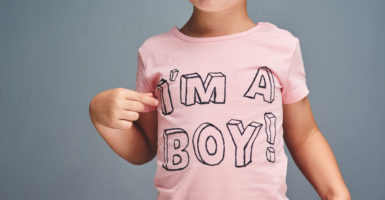 "Girls as young as 12 are prescribed testosterone for lifetime usage, while boys are given estrogen," says a woman whose daughter is suffering from gender dysphoria. (Photo: PeopleImages/Getty Images)

A mom whose daughter has identified as transgender since the age of 14 says that she is speaking out to bring awareness to how children are misdiagnosed and mistreated when suffering from gender confusion.

“I am here today, not just because I care about children who identify as transgender, but because I also care about their parents and other family members,” said “Elaine,” the anonymous mother of a gender dysphoric daughter.

A man who once lived as a transgender woman also warned about “experts” who encourage children to be unhappy with their sex at birth.

The two spoke Thursday during a panel discussion, “The Medical Harms of Hormonal and Surgical Interventions for Gender Dysphoric Children,” at The Heritage Foundation.

“Parents are doing everything they can to help their kids lead healthy, happy, and fulfilling lives, yet when parents seek out experts for help, they receive a one-size-fits-all narrative that has no basis in science, common sense, or compassion,” Elaine said.

She added that experts now tell parents it is “harmful” to question their child’s beliefs on their gender, and that they have to support their children’s transitions, including a lifelong dependency on hormones.

“Their children will be at higher risk of suicide,” Elaine said. “These parents are being lied to as their children are harmed and their families are torn apart. Why not help children learn to love the bodies in which they were born?”

She said many in the medical and psychological associations treat children wanting to transition genders with a protocol called “affirmative care.”

“If you take your child into a clinic to seek help, ‘affirmative care’ means the therapist must follow the child’s lead,” she said. “The professionals must accept a child’s gender identity.

“In fact, this is the law in many states under ‘conversion therapy’ bans. Questioning a child’s gender identity is now illegal, so if a little boy is 5 years old and believes he is the opposite sex, affirmative care means going along with his beliefs.”

Elaine said some girls who want to transition to become boys are getting hormone therapy even before they are teens.

“Girls as young as 12 are prescribed testosterone for lifetime usage, while boys are given estrogen,” Elaine said. “These are serious hormonal treatments that impact brain development [and] cardiovascular health, and may increase the risk of cancer. There are no long-term studies to prove this is necessary, safe, or prudent.”

Rutigliano, the emergency medicine specialist, said teens who have made gender transitions are becoming suicidal.

“Starting in about five … to 10 years, the rates of suicide start to go up dramatically,” she said. “And this is supposedly after being well integrated into society.”

Heyer, another panelist, used to live as a transgender woman and today travels the country speaking about his experiences and reaching out to those who regret their own gender change. He said children are ill-served by adults who encourage or support their gender change.

He said his personal experience has shown him that most often, those struggling with transgenderism can trace it back to sexual abuse in their past.

Those people end up deciding that the only way they can keep themselves from continued sexual abuse “is to cut off their genitalia and become females,” he said. “In their mind, that is their defense mechanism for sexual abuse.”

Laidlaw, the endocrinologist, said there is “no objective test to diagnose” transgenderism yet.

“We’re giving very harmful therapies on the basis of no objective diagnosis,” he said. “There are only two sexes. Certain science publications want to make you think there is more, or that it’s a spectrum.”

Elaine, the mother, said she is striving to spread awareness about the harms of the transgender movement.

“I am speaking out because I love my daughter, and it is because of her that I know what I told you today is true,” Elaine said. “She has been a victim of ‘gender affirming’ medical procedures, and I was powerless to stop doctors from harming her. Someday, I hope she will realize that I am advocating for her health and for her future.”