How Conservatives Must Counter the Media’s Left-Wing Election Advocacy 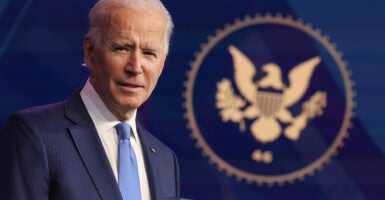 While there’s little doubt that left-leaning bias is rampant throughout much of the political media, is that bias powerful enough to swing a presidential election? According to a survey of those who voted for Joe Biden in November, it made a big enough difference to hand six swing states to the former vice president.

Unfortunately, there are no recounts for media bias. So, how do we prove the effect of that bias, and what can conservatives do to counter it in the future?

The Media Research Center found that 17% of Biden voters wouldn’t have voted for him had they known about one or more of the stories. Bozell’s calculations show that was enough to move six swing states into Trump’s column, giving him 311 Electoral College votes—enough to retain the presidency.

For example, 39% of Biden voters said they didn’t know about the record 11 million jobs created from June to October in the snapback from the pandemic. If they had, 5.4% would have changed their vote. And if they had known about Biden’s sexual assault allegations, 8.9% said they wouldn’t have voted for him.

Of course, reporting wasn’t always this slanted. Years ago, Sam Yette, a former Newsweek reporter and a leftist who nonetheless took pride in his straight reporting, once invited me to his journalism class at Howard University.

I was there to test his students to see if they could interview and write a story about a conservative black woman with whom they likely disagreed without injecting their biases. The hitch was that I got to grade their papers. Yette’s lesson that day was how to report the facts without editorializing.

Unfortunately, today, editorializing regularly gets passed off as news, and we’re seeing its grave effects. The media’s coverage of the presidential election served the left’s agenda, not democracy.

So what’s the solution to countering the bias?

The first part of the solution is continuing the great work of the Media Research Center and others to expose bias and let Americans know they’re being lied to.

The second part is growing the reach of conservative news outlets like The Washington Times, Fox News, Newsmax, talk radio, and The Heritage Foundation’s own Daily Signal (where we produce both news and opinion, but we clearly label them as such and work to keep our opinions out of the news).

Alternative outlets like these are critical to reporting on the multitude of important stories that the legacy media refuses to cover—or cover truthfully.

The third part is conservatives showing up where the rest of America is tuned in. Conservatives can’t expect that Fox News will steal away every viewer from CNN or CBS, or that The Daily Signal will wrest all the readership from The New York Times.

While it’s important for conservatives to inform their base through friendly media outlets, they have to do more than preach to the choir. They need to show up on left-leaning media outlets, especially whenever they can be live and unedited.

Good things can happen when they do. Trump proved in this election that the conservative policies that unleashed our economy and left more money in the pockets of American families appealed to people who didn’t necessarily consider themselves conservative. Ditto for issues like immigration reform and election integrity.

Trump’s conservative approach to many issues led to significant increases in the number of blacks, Latinos, and Asian Americans who voted for him over 2016.

In the end, journalists who disguise opinion as straight news are admitting that they don’t have enough confidence in their leftist philosophy to trust people with the facts to make up their own minds. And they’re right—the appeal of leftism withers in the sunlight of truth.

Those kinds of journalists aren’t the guardians of truth that the Founders envisioned for the media in our democracy. Instead, they’re little better than the propagandists who’ve done the bidding of tyrants and dictators throughout history.

Their credibility rests on a thin thread that will eventually break as more Americans seek the truth. It’s up to conservatives to expose Americans to that truth, making sure the media either changes their ways or that thread snaps once and for all.