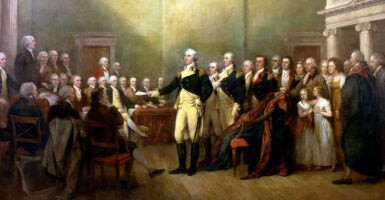 Americans are being taught to apologize for these Founding Fathers who sacrificed their fortunes, time, and lives to create a nation that is a bastion of freedom around the world. Pictured: A painting depicts Gen. George Washington resigning his commission as commander of the Continental Army. (Photo: John Parrot/Stocktrek Images/Getty Images)

In recent weeks, thousands of protesters have taken to the streets of America to declare that the lives, fortunes, and sacred honor of the Founding Fathers no longer should be considered the true foundation of the United States of America.

The death of George Floyd in police custody May 25 sparked a wave of already-simmering anger against the Founding Fathers. Their legacy, largely unchallenged for two centuries, has come under attack from educational institutions, media, and the left.

A MUST WATCH >>> This congressional hearing was focused on the removal of statues from public lands—but Dr. Joseph Loconte addressed something unexpected: Civic Literacy.

According to Smithsonian Magazine, George Washington’s legacy is nothing more than “false teeth, tricorn hats, and nearly 150 slaves.” CNN suggested that Americans no longer should consider the Founders a part of America’s exceptional history.

Monuments of the Founding Fathers have been defaced, toppled, and denigrated in violent protests across America. According to CNN, this blatant disrespect is simply modern Americans’ attempt to “declare their independence from symbols and ideas that no longer represent them.”

Are Americans finally awakening to the truth about their racist, bigoted forefathers, or are they instead becoming victims of deceptions designed to destroy our country by destroying our respect for its history?

Consider some of the men who founded our great country but now are under attack.

George Washington’s skill, character, and leadership were so widely acknowledged that the Continental Congress selected him unanimously to lead the Continental Army in June 1775.

Washington refused to accept the salary the Congress offered him and undertook an assignment that would take him from his home and family almost perpetually for more than eight years.

Washington consistently refused the privileges he could have enjoyed as commander in chief, choosing to winter with his men at Valley Forge, Pennsylvania, and even to personally join battles to inspire and rally them.

After America’s independence was secured, Washington again sacrificed his desire for a quiet country life by serving as America’s first president. He then set the precedent for voluntary relinquishment of power by stepping down after only eight years as president.

Washington’s legacy of self-imposed presidential term limits was emulated by every American president until Franklin Delano Roosevelt, after which the tradition was codified in the Constitution with the 22nd Amendment in 1951.

Alexander Hamilton, a man of tremendous vision and talent, helped establish many of the foundational pillars of the American republic. During the time of unprecedented doubt and division following the end of the war and the failure of the Articles of Confederation, the 13 states looked to delegates of the Constitutional Convention to provide them with a stable government that would ensure both order and freedom.

Hamilton led the charge to make sure that the Constitution would be ratified. He authored 51 of the 85 Federalist essays, which were largely responsible for convincing states such as New York to ratify the Constitution.

Hamilton also helped to create the First Bank of the United States, the U.S. Mint, and the U.S. Coast Guard to promote finance and protect American shipping and commercial interests.

Thomas Jefferson’s tremendous scholarship masterfully recognized and communicated the universal American ethics of inalienable rights, individual human dignity, and liberty in the Declaration of Independence, which severed the 13 colonies’ dependence on Great Britain.

Drawing from his wide knowledge of European philosophers such as Locke and Montesquieu, Jefferson’s Declaration encapsulated the wisest and freest political theories of the centuries.

As our third president, Jefferson led America to victory over the machinations of the Barbary States, strengthened the Navy, and firmly declared America’s independence on the world stage.

What motivates the people behind this drive to denigrate the Founders and erase their legacy? Is it that when history is warped and destroyed, modern society is deprived of a compass by which to gauge its standing and future course?

The men who created this nation were not infallible demigods, but they were men of exceptional intellect, creativity, and moral ambition who strove to achieve a greatness that had never been attempted.

Today’s “heroes” are not discarded for often blatant mistakes, and they have done nothing to truly devolve power to the people.

Americans are being taught to apologize for these Founding Fathers who sacrificed their fortunes, time, and even lives to create a nation that is a bastion of freedom around the world.

The attempted destruction of their legacy robs young Americans of exceptional role models who should be inspiring them to value character, strive for excellence, and believe in greatness.