Jordanians Head to the Polls Amid Mounting Economic and Health Crisis 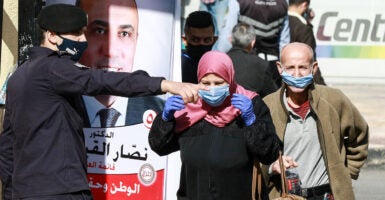 Jordan is holding a parliamentary election on Tuesday as discontent over a spike in coronavirus cases and economic fallout increases. Pictured: A member of the Jordanian security forces directs voters outside a polling station in Jordan's capital Amman on Nov. 10. (Photo: Khalil Mazraawi/AFP Getty Images)

A spike in COVID-19 cases and deteriorating economic conditions has cast a shadow over Tuesday’s parliamentary elections in Jordan. These elections are widely seen as a political mechanism to mitigate the growing anger over COVID-19-related hardships, which have recently taken a turn for the worst.

Jordan’s strict lockdown measures in the beginning of the pandemic were largely seen as successful in preventing a large-scale outbreak, as the number of cases reported every month remained under 100 infected and even fewer death rates.

However, after gradually easing restrictions over the summer, Jordan saw an exponential rise in COVID-19 cases beginning in September.

Now, the country’s infection and death rates have surpassed nearby countries in the Middle East, with widespread community transmission that has hit approximately 16% of the population.

Jordan’s recently appointed prime minister, Bisher al Khasawneh, has stated that the country will not return to complete lockdowns. Instead, overnight curfews and Friday short-term lockdowns will continue for the rest of the year.

However, the rise in cases does not show signs of slowing down, which is an alarming development for a country whose strained health care system and fragile economy are being hit hard by the pandemic.

The economy is expected to detract by 6%, while unemployment has risen to 23%, with an estimated $3 billion lost in tourism revenues in the first nine months of 2020.

Jordanian citizens are feeling the impact of this deepening economic crisis. A recent UNDP rapid assessments report found that nearly 75% of people in Jordan reported difficulty in meeting basic needs such as rent, food, heating, and medicine, and have faced challenges accessing health care under lockdown.

The election of parliament on Tuesday will do little to change the deepening economic crisis, as the status quo is likely to remain the same. Voter turnout is projected to be around 30%, with a continuation of the 2016 electoral system.

The kingdom is divided into electoral districts where candidates are chosen based on a proportional, open-list system where major parties or blocs must provide a list of candidates for each district. During the election, voters are then required to choose one list, and can cast multiple votes for candidates within that list. The seats are then allocated proportionally based on the percentage of votes received by each list.

While this was meant to strengthen political party formation, it essentially caused competition between the lists, dividing Islamist party supporters while empowering tribal candidates and business elite in rural areas.

Even so, the Muslim Brotherhood-affiliated Islamic Action Front has stated that it will participate in the upcoming elections, hoping to improve on the 16 seats it gained in the 2016 elections.

Regardless of the outcome, all eyes will remain on King Abdullah, whose government appointments will determine the country’s next steps. Jordan’s stability is vital for U.S. interests in the region. As the country faces mounting pressure amid a spiraling economic and health crisis, the United States must closely monitor the evolving situation.