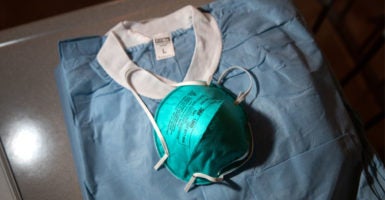 Personal protective equipment awaits health workers at a drive-thru testing center for coronavirus at Lehman College on March 28, 2020 in the Bronx, New York City. The center, opened March 23 at Lehman College, can test up to 500 people per day for COVID-19. (Photo: John Moore/Getty Images)

The Heritage Foundation’s newly released 2020 Index of Economic Freedom provides plenty of evidence of the value of economic freedom.

People in freer societies live longer, have much higher levels of income and overall prosperity, and enjoy better health care, cleaner environments, and greater educational opportunities than those societies that are less free.

Not all of that may seem relevant in the face of a new virus that crosses borders easily and respects no claims of class or wealth.  Still, there are plenty of indications that freer societies are better placed than more socialist or controlled economies to respond effectively to the health challenges of the COVID-19 coronavirus.

As my colleague Anthony Kim noted last week, “nations with greater levels of economic freedom are clearly better positioned to ensure better outcomes, given their superior overall capacity to prevent, detect, and respond to significant disease outbreaks as defined by the Global Health Security Index.”

In years past, Americans would have faced a health crisis like COVID-19 with support primarily from their family doctor, their extended families, or their religious communities. Those institutions still help millions, but are undeniably weakened in today’s more mobile and heavily regulated society.

As a result, many Americans are looking primarily to the government for help. That’s not necessarily a problem. Government is one avenue through which “we the people” act collectively to address our problems.

Given the size and scope of our governments today at the federal, state, and local levels, they obviously have the means to offer some assistance to those in need. But government, uniquely among the various institutions of American society, also has the ability to act with coercion, and the threat to our economic freedom from coercive government policies or actions is real.

With economic lockdowns, shelter-at-home orders, and mandatory business closures in place or on the table, it’s clear that government actions are already having a severe impact on our economic freedom.

Such activities, at least, will pass as the health crisis ebbs.  More insidious may be the less-direct actions taken by the government to inject itself more deeply into our economic lives through new regulatory actions, such as requiring paid sick leave, controlling hiring and firing decisions, or interfering with long-established supply chains through tariffs or other trade restrictions.

Finally, while additional spending measures may seem benign, careless subsidies distort economic decision-making and hurt efficiency, and leave a legacy of debt that will have a negative impact on our children for decades to come.

Government regulations and spending programs are a blunt instrument, and we know from experience that government actions—however well-meaning—are rarely without unintended, often negative, consequences. That’s no less true in a crisis.

What’s to be done? The Heritage Foundation has in recent days put forward suggestions (here and here) for carefully calibrated and tailored actions that government can take to help Americans now without compromising the strength and vitality of our economy in the future.

The main watchwords are “targeted” and “temporary.”

What’s not needed, and indeed what must be avoided at all costs, are programs that will permanently increase the scope of government and its control of our economic lives.

Before this virus hit, the U.S. economy had made us the strongest and most prosperous society in the history of the world. The free-market system underlying that economy remains in place, but threats abound from politicians across the political spectrum who would use our current crisis to remake the system into their own particular version of a socialist or mercantilist nirvana.

The American people are smarter than that.  Our collective genius has always been our determination to fight for and preserve our freedom as individuals to decide for ourselves how to live our lives.

The wisdom and value of that determination is validated every day by the immigrants at our borders and, as shown in the Index of Economic Freedom, the efforts of millions around the world pressing their own governments to make their countries more like ours.