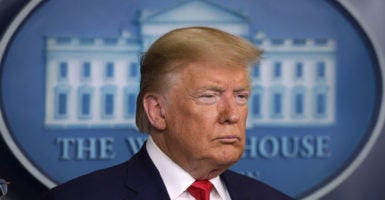 President Donald Trump pauses Saturday during a press conference on the coronavirus at the White House. (Photo: Alex Wong/Getty Images)

The Trump administration is facing the coronavirus by preparing for the worst and aggressively pushing forward to tackle the disease, including “keeping sick people out of this country,” acting Homeland Security Secretary Chad Wolf said Saturday.

“At the Department of Homeland Security, our main mission when we talk about the coronavirus is to make sure we are keeping sick people out of this country,” Wolf told an audience of conservative activists at the Conservative Political Action Conference, or CPAC, outside Washington.

Trump administration officials stepped up speaking about the potential threat as the first confirmed U.S. death was reported in Seattle from the virus, which emerged in China.

In a news conference Saturday at the White House, Trump announced the U.S. death as well as new travel restrictions on visitors from Iran and new screenings for travelers from South Korea and Italy.

The coronavirus outbreak has infected more than 84,000 and killed nearly 3,000 globally, according to data collected by Johns Hopkins University, USA Today reported.

The Centers for Disease Control and Prevention is closely tracking the spread of the disease while spearheading efforts to contain and cure it, confirming 15 cases originating in the United States as of the weekend.

At the White House, Trump urged Americans to follow the recommendations of public health officials.

“We’re doing really well. Very, very professionally handled,” Trump said. “We will respectfully ask the media and politicians and everyone involved not to do anything to incite a panic.”

The president, flanked by federal health officials, said he is considering closing the U.S.-Mexico border as a precaution.

“Yes, we are thinking about the southern border. We are looking at that very strongly,” Trump said in response to a question.

“We are planning for the worst. I hope it doesn’t come to that,” Wolf said at CPAC. “You can rest assured we are doing everything within our power to make sure the American people are safe.”

Trump has been “forward leaning” in tackling the matter, he emphasized.

Wolf noted that Trump took heavy criticism for this.

“If you recall, the president was criticized for taking that bold action, several weeks or a month ago,” Wolf said. “Those same individuals are now criticizing this administration for not doing enough. We continue to push forward.”

The administration’s task force is coordinating government agencies’ response to what could become a pandemic abroad.

Energy Secretary Dan Brouillette, sharing the stage with Wolf at CPAC, stressed that his department is applying research methods to the coronavirus challenge.

“For those not familiar with the Department of Energy, we have 17 national laboratories. We happen to own the two fastest supercomputers in the world,” Brouillette said.

He said a scientist at the department’s Oak Ridge National Laboratory in Tennessee is researching how to combat the virus.

His department is using biosecurity and artificial intelligence to establish models for dealing with the virus, Brouillette said.

“We are also breaking down the virus,” he said.