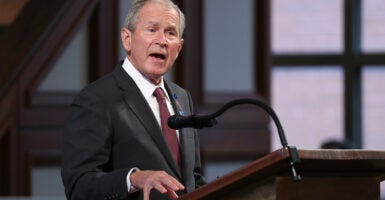 “I know Joe Biden to be a good man, who has won his opportunity to lead and unify our country,” former President George W. Bush says. Pictured: Bush speaks during the funeral service of the late Rep. John Lewis, D-Ga., July 30, 2020, in Atlanta, Georgia. (Photo: Alyssa Pointer-Pool/Getty Images)

Bush also congratulated President Donald Trump and his supporters for their “hard-fought campaign” and for earning more than 70 million votes. Multiple outlets, including Fox News and The Associated Press, projected Biden’s win, though the Trump campaign is fighting several legal battles regarding election results.

“Though we have political differences, I know Joe Biden to be a good man, who has won his opportunity to lead and unify our country,” Bush said in the statement. “The President-elect reiterated that while he ran as a Democrat, he will govern for all Americans.”

Bush extended an offer of prayers for Biden’s success and pledged to help in any way he could. Bush said the voter turnout for this election shows a healthy democracy.

“President Trump has the right to request recounts and pursue legal challenges, and any unresolved issues will be properly adjudicated,” Bush said. “The American people can have confidence that this election was fundamentally fair, its integrity will be upheld, and its outcome is clear.”

JUST IN: Former President George W. Bush says he has called Joe Biden to congratulate him on his election victory. https://t.co/g31lrZcB3W

Bush urged unity for all Americans to extend their best to Biden and Harris.

“There is no problem that will not yield to the gathered will of a free people,” Bush said. “Laura and I pray for our leaders and their families. We ask for God’s continued blessings on our country.”

The George W. Bush Presidential Center did not immediately respond to The Daily Caller News Foundation’s request for comment.