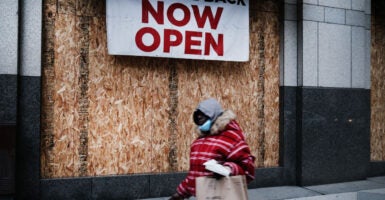 This has been a year unlike any other. We have seen unrest and conflict in America at a level that most of us have never experienced. Pictured: Windows are boarded up on Election Day as fears of unrest grow on Nov. 3, 2020, in Philadelphia. (Photo: Spencer Platt/Getty Images)

Looking out the windows today, the skies are blue, but it’s eerily quiet. In Washington, D.C., where I live, businesses have boarded up their windows in preparation for violent protests. Anxiety and trepidation hang in the air. It’s almost palpable.

There has been so much tension in the run-up to our recent election. But I remain hopeful.

This has been a year unlike any other. We have seen unrest and conflict in America at a level that most of us have never experienced. Between the uncertainty and devastation brought on by the COVID-19 pandemic, violence in the streets leading to looting and rioting, and the protests organized by Black Lives Matter and Antifa, people are coming into conflict on a near-daily basis.

Supporters of former Vice President Joe Biden are clashing with supporters of President Donald Trump. Verbal assaults are escalating into physical confrontations. Increasing polarization has led us to feel hatred toward those who think differently, and our understanding and empathy has collapsed into chaos. If you’re not with me, then you’re against me. This is who we’ve become in 2020.

But it doesn’t have to be that way.

There was a time, not too long ago, when we could have political disagreements and remain civil. When someone’s choice of a candidate didn’t preclude him or her from having friends who supported the opposing candidate. When we believed that our differences and disagreements were constructive and made us stronger.

We have lost sight of the fact that we are supposed to be the United States of America. We have never known an election cycle where the voter couldn’t admit who they voted for.

Right now, it feels like we are the Divided States of America. And as Abraham Lincoln, the flag-bearer of the Republican Party, noted, “A house divided against itself cannot stand.”

I would venture to say that not since the Civil War has there been so much hatred, brother against brother, sister against sister.

We must not be torn apart. My hope is that we move past this election. Regardless of who wins, there will be frustration, disappointment, and anger. But we need to contain ourselves and refrain from engaging in destructive behavior. We need to remain civil, and we need to be patient.

Though this democracy of ours is sometimes messy, it does work. If we let it operate as it should, then it can keep us the greatest country on the face of the planet.

In the coming days, it is crucial that we not lose sight of the fact that it is no happy accident that America became the leader of the free world. Our institutions were designed for the peaceful transition of power, for political parties working together, despite differences, to achieve greatness.

To continue in this time-honored tradition, we must respect one another across political lines and acknowledge that a difference of opinion does not equate to a difference of morality. We cannot let the hatred, chaos, and destruction win.

We must act with care for each other. The world will be watching this election with bated breath, and it will be judging our strength based on our collective response to this contentious moment.

America, this is our chance to show the international community that we are committed to democracy and civility and to respecting the outcome of one of our most cherished freedoms, for which so many have fought and died—the right to vote and choose our leaders. This is the very core of what it means to be a proud American.

At the end of the day, however the election turns out, it is time for us to get back to being the best version of ourselves. America has long been a model to the rest of the world. Let’s hold ourselves to that high standard. Let’s elect to be civil and choose to remain a beacon of stability and freedom to nations everywhere.