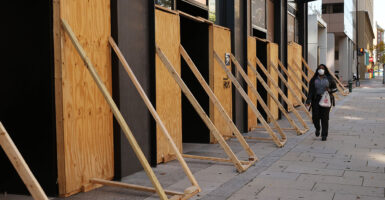 Retail businesses and office buildings are boarded up in anticipation of Election Day vandalism near the center of the nation's capital in Washington, D.C., Nov. 2. (Photo: Chip Somodevilla/Getty Images)

Submitting my weekly column on the morning of the 2020 presidential election was surreal. But not as surreal as walking to work through an apocalyptic cityscape of boarded-up buildings.

No, this isn’t communist Cuba; this is Washington, D.C., the supposed center of the free world.

Even more disquieting than the scenery is the knowledge that my own organization, the Center for Urban Renewal and Education (UrbanCURE), has been targeted by ShutDownDC, a left-wing group promising to execute vigilante justice if the election doesn’t play out to its liking.

According to The Daily Signal, a daily online newsletter from The Heritage Foundation, ShutDownDC has scornfully labeled at least 27 conservative organizations as “Trump boosters,” including well-respected partners of UrbanCURE, major policy institutes that have been in Washington for years—such as The Heritage Foundation and the American Enterprise Institute.

ShutDownDC’s interactive map of “Trump boosters” has the potential to make rage-fueled election riots more convenient than ever.

On my walk to work, looking at the boarded-up buildings, I chuckled to myself that I should have invested in lumber stock. But I couldn’t help feeling mournful over this sad state of affairs—that in 2020 America, election-related fear is tantamount to election-related fear regularly felt in Third World countries run by dictatorships.

When I wrote my most recent book, “Necessary Noise: How Donald Trump Inflames the Culture War and Why This Is Good News for America,” released in November 2019, I knew that America was in trouble. But I didn’t anticipate the overwhelming fear that would grip our nation exactly one year later.

From widespread panic about COVID-19 to protesters agitating entire police departments, the America we knew is increasingly unrecognizable.

But most voting-age Americans in 2020 still haven’t grasped the fact that freedom is never guaranteed. Historically, many once-free societies have voluntarily given up their freedom—and we could be next.

Yes, we Americans know the grim stories. We just need to glance at our neighbors to the south: Cuba and Venezuela. We’ve clung to the belief that America is different—that, at the end of the day, we can always go to battle at the voting booth, and that even if things don’t go our way, we’ll get another chance in two, four, or six years.

But in 2020, we can’t be so sure. In fact, if we’re honest with ourselves, we already had reason to doubt the survival of our democratic system back in 2016.

By the 2016 election, America had fundamentally changed, although very few noticed. America had split in two, not just between red and blue, between Democrat and Republican, but between two polar-opposite philosophies and worldviews.

But most critical, there are substantial numbers on the left who like to throw around the word “democracy” but do not at all believe in freedom. They believe in power, force, and intimidation.

Hence, most major U.S. cities, including Washington, D.C., and Beverly Hills, California, are boarded up in anticipation that we won’t see the kind of peaceful election we expect in our democracy.

We can discuss the causes for the split all day. We can blame our colleges and universities, our ethnic policies and diversities, our lack of religion, or our diminished value of traditional marriage and family.

But in this moment, we as a nation face an existential threat. American citizens rightly fear that their business could be torched by an angry mob, or that their person could be attacked, just because they put up an election sign or wear a MAGA hat.

This is not the America we know and love.

On this Election Day, we have reason to worry that America is changed forever—that fear, rage, and violence have overpowered freedom and democracy. But all hope is not lost. Truth is always stronger than fear. And we’ll keep fighting for the truth, no matter what happens.