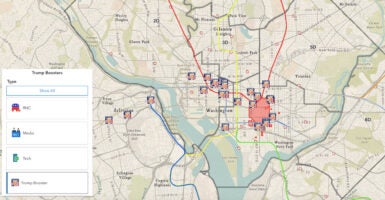 Shut Down D.C., a progressive group that says it uses “strategic direct action to advance justice and hold officials accountable,” is targeting at least 27 conservative organizations in the Washington metro area as Election Day approaches.

An interactive map from Shut Down D.C. lists as “Trump boosters” a range of organizations, including The Heritage Foundation, the parent organization of The Daily Signal.

Shut Down D.C.’s map contains the address, phone number, and website for each listed group. It also shows the location of media organizations, technology companies, and government offices in Washington, D.C.

The left-wing group’s website boasts that “we’re getting ready for an uprising. Now’s the time to get involved so we’re ready to hit the streets.”

Shut Down D.C.’s election week plan includes three phases: assembling on Nov. 3 at Black Lives Matter Plaza, taking action in the streets from Nov. 4-7, and targeting members of Congress when they return to Washington on Nov. 8.

“Affinity groups may want to start now to plan actions that confronting [sic] targets who need to be disrupted regardless of what is playing out with the vote count (Department of Justice, ICE, RNC, etc.),” the website warns.

On Friday, Shut Down D.C. retweeted a tweet from an account called Earth Guardians that said: “If you’re planning on taking to the streets on election day, @ShutDown_DC has lots of trainings to make sure you have the tools to stay safe and knowledgable [sic] of your rights. Check out the list of trainings below. https://shutdowndc.org/calendar #shutdowndc #earthguardians.”

Join ShutDownDC for a direct action and street smarts training! We’ll cover the basics of working together in small groups, preparing for direct action, and staying healthy and safe in the streets. This session will be entirely in person.

It also prompts those interested to register at this link to receive location information for the training and other logistical information.

In September 2019, Shut Down D.C. staged climate protests in the nation’s capital in conjunction with world leaders gathering in New York City as part of the U.N. Climate Action Summit. The Daily Signal previously reported that “these activists took to the streets … to dance and shout their way to ‘climate justice.’”

During that protest, Shut Down D.C. blocked streets to stop traffic and activists held banners that stretched across an entire road, The Daily Signal reported. Others used more creative methods to make sure no one missed their demonstration.

In a statement provided Friday to The Daily Signal in response to an inquiry, Metropolitan Police Department spokeswoman Alaina Gertz wrote:

In regards to public safety planning, MPD does not discuss operational tactics; however, our Special Operations Division is equipped to handle First Amendment assemblies of any stature. Also, Chief [Peter] Newsham and Mayor [Muriel] Bowser provided additional guidance to the city’s preparations for the election at the press conference yesterday.

Bowser’s office did not respond to The Daily Signal’s request for comment on Shut Down D.C.’s guide to “Trump boosters” by publication deadline.

The Washington Post reported Friday that Bowser “said the District’s public safety officials have been discussing plans for post-election unrest for many weeks if not months.”

Here is the complete list of “Trump boosters” from the Shut Down D.C. map: