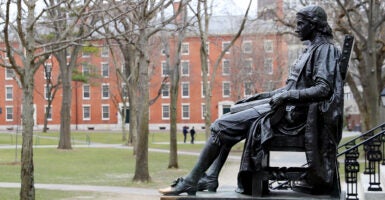 Harvard University announced the creation of a committee Monday “to articulate general principles” for removing the names of “historical figures” from campus, according to a statement from the school president.

Harvard President Lawrence S. Bacow said the committee should evaluate “the individual’s failings and flaws but also the individual’s positive contributions to the University and to society” when determining whether the name of a “historical figures” should be removed from “Harvard buildings, spaces, professorships, programs, or other named objects,” according to a press release.

BREAKING: President Bacow announced the formation of a Committee to Articulate Principles on Renaming that will guide the renaming of “campus buildings, spaces, programs, professorships, and more in view of their association with historical figures.” https://t.co/WDLIV1IHGt

“Increasingly, members of our community are raising questions about the propriety of past decisions to recognize certain historical figures by having named things for them or by honoring them with artifacts such as statues or portraits. More specifically, questions are being raised about whether these individuals’ names or representations should be removed in view of their past advocacy or support of activities that many members of our community would today find abhorrent,” Bacow continued in the press release.

The group consists of multiple historians, including the committee chair, Drew Gilpin Faust, president emerita and professor at Harvard University, according to The Harvard Crimson.

“I think all the committee members recognize that this is a moment when our nation’s long-articulated commitments to justice and equality must at last be realized,” Faust said in a press release, according to The Harvard Crimson. “The time is here.”

Faust, “a historian of the Civil War and the American South,” noted that a long-time worry she’s had are renaming issues, deeming her a “good match” for the new group, The Harvard Crimson reported.

Bacow also urged the committee to consider other institutions’ reports, including Stanford University and Princeton University, that have dealt with mirroring situations and questions, according to the press release.