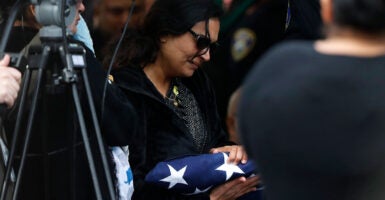 A new federal rule promulgated this week by the departments of Justice and Homeland Security is intended to curb the gaming of the asylum process by criminal illegal aliens. Pictured: Anamika Chand-Singh, widow of slain Newman, California, Police Cpl. Ronil Singh, reacts after the flag is presented during her husband's funeral service at CrossPoint Community Church Jan. 5, 2019. Ronil Singh was fatally shot by an illegal alien on Dec. 26, 2018. (Photo: Stephen Lam/Getty Images)

The departments of Justice and Homeland Security announced the publishing Wednesday of a final rule that seeks to protect both Americans and immigrant communities from domestic abusers, drunken drivers, felons, gang members, and other criminal aliens who are seeking asylum in the United States.

This commonsense rule will protect the integrity of the asylum process by ensuring that asylum is not granted to individuals who present a danger to our communities.

Many Americans will be surprised to learn that these categories of individuals were eligible at all for asylum before this rule.

Asylum is a discretionary immigration benefit available to aliens, legal and illegal, that allows them to claim what is known as a “well-founded fear of persecution” in their native country “on account of race, religion, nationality, membership in a particular social group, or political opinion.”

Asylum is commonly understood by the public and advertised by the left as an obligation of the United States to extend sanctuary to anyone fleeing their home country.

It’s often presented in its most sympathetic light, with charges that denial of asylum is a death sentence.

In reality, due to the burdensome and lengthy legal process involved and the ability of asylum-seekers (even those with little chances of successful claims) to stay in the United States through the duration of their proceedings, falsely claiming asylum has exploded as a vector for the “open borders” movement.

Because of that explosion, The Heritage Foundation has consistently called for reforms to the system to ensure that only meritorious claims are granted and that frivolous claims do not hold up the system.

As my colleague Lora Ries has pointed out:

Immigrants with viable claims of asylum or other meritorious claims for legal status in the United States should have confidence that their cases will be handled in a fair, legal, and expeditious manner, but because our immigration court system is so overwhelmed, cases of merit are combined with meritless cases, each of which can take years to resolve.

In many cases, the abuses are flagrant. For example, the U.S. government rejects about 90% of asylum claims after review.

Even when cases are resolved, if they result in a deportation order, many do not report for deportation.

Currently, the Immigration and Nationality Act bars specific categories of aliens from receiving asylum, but delegates the authority to the attorney general and secretary of homeland security to spell out in regulation additional restrictions that are consistent with the asylum statute.

This new final rule does just that.

Notably, the new rule protects victims of domestic violence by using an evidentiary bar lower than requiring a criminal conviction against an alien abuser. Immigration judges are now allowed to take into account other evidence of domestic violence, such as restraining orders or other cruel conduct.

Also, due to the particular evidentiary concerns surrounding sexual assault cases and consent, securing a conviction can often be difficult. Using a lower bar for illegal aliens (i.e., noncitizens) is a reasonable use of discretion by an immigration judge seeking to protect victims.

The new rule should be cheered by all advocates of an orderly immigration system that seeks to provide the United States’ generous asylum benefit only to those who truly deserve it.