Supreme Court Ruling on Illegal Immigration a Victory for Trump 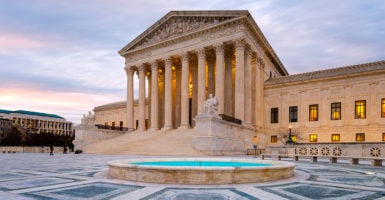 A 7-2 ruling by the Supreme Court Thursday allows the Trump administration to continue doing what the executive branch is supposed to do: enforce the laws passed by Congress. (Photo: Joe Daniel Price/Getty Images)

In a victory for border security that will help the federal government regain control over the immigration process, the Supreme Court has upheld commonsense rules used by the Trump administration to effectively deter illegal immigrants from making false asylum claims.

The 7-2 ruling by the high court Thursday allows the Trump administration to continue doing what the executive branch is supposed to do: enforce the laws passed by Congress.

Vijayakumar Thuraissigiam was caught entering the U.S. illegally in 2017, just 25 yards inside the southern border. The Sri Lankan claimed asylum, saying that he had once been “abducted and severely beaten,” although he said he had no idea who had done it or why.

Thuraissigiam did not claim that he had been persecuted—or feared persecution—because of his race, religion, political opinions, or any of the other valid reasons that federal immigration law provides for granting asylum.

The Supreme Court noted that in 1996 Congress had approved “a system for weeding out patently meritless [asylum] claims and expeditiously removing the aliens making such claims from the country.”

This expedited removal process limited the ability of those seeking asylum to petition federal courts to review decisions made by the Department of Homeland Security on the validity of their claims.

Claimants can, however, avoid the expedited removal process by demonstrating a “credible fear of persecution.” In that case, they are entitled to “full consideration” of their claim in a full-blown removal hearing presided over by a federal immigration judge.

Even if an illegal immigrant’s “credible fear” claim is rejected by an asylum officer, it is still reviewed by a Department of Homeland Security supervisor and may then be appealed to an immigration judge. But the law says courts can’t review the determination by the Department of Homeland Security that an applicant lacks a credible fear of persecution.

In Thuraissigiam’s case, a Department of Homeland Security asylum officer rejected his claim, which was based solely on his assertion that he had been beaten by unknown assailants. This is not a valid ground for receiving asylum. A supervising officer agreed to reject the asylum claim and an immigration judge affirmed that decision.

It wasn’t until Thuraissigiam’s lawyer filed a habeas corpus petition with a federal court that he started claiming he feared persecution based on his Tamil ethnicity and political views. The district court threw out his habeas corpus petition, complying with the federal immigration provision limiting its ability to review the claim.

But the 9th U.S. Circuit Court of Appeals—one of the most liberal appeals courts in the country, with a long record of misapplying or ignoring federal laws it doesn’t like—reversed the district court. The appeals court held that the federal immigration provision violated the Constitution’s Suspension Clause and its Due Process Clause.

The Suspension Clause of Article I, Section 9 holds that the “Writ of Habeas Corpus shall not be suspended, unless when in Cases of Rebellion or Invasion the public Safety may require it.” The Due Process Clause of the Fifth Amendment says that you cannot be “deprived of life, liberty, or property, without due process of law.”

But the Supreme Court disagreed and, once more, overturned the 9th Circuit’s holding.

In an opinion written by Justice Samuel Alito, the Supreme Court said the habeas doctrine provides a means for someone being held illegally by the government to seek release. But Thuraissigiam wasn’t asking to be released from detention; he was asking for a second chance to ask a federal court to approve his asylum claim. Therefore, the expedited removal provision does not violate the Suspension Clause, the Supreme Court ruled.

As Alito noted: “The decisions of executive or administrative officers, acting within powers expressly conferred by Congress, are due process of law.” That means that illegal immigrants don’t have to be given access to the courts.

Even liberal Supreme Court Justices Stephen Breyer and Ruth Bader Ginsburg concurred in the judgment, although they limited their opinion just to the facts of this particular case. Justices Sonia Sotomayor and Elena Kagan dissented, saying that the courts should have the ability to review asylum decisions that are arbitrary and capricious or contrary to governing law.

The Supreme Court decision does not interfere with the ability of Congress to change our immigration laws, but makes clear that as long as the laws are on the books it is the job of the federal government to enforce them.