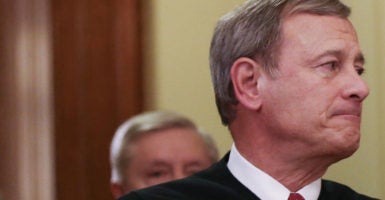 With the Supreme Court’s latest erroneous decision on immigration, Chief Justice John Roberts and other justices have done lasting damage to the Constitution, the rule of law, and accountable government.

It is not just the legally wrong decision Thursday in Department of Homeland Security v. Regents of the University of California, in which Roberts and the liberal justices refused 5-4 to allow the Trump administration to terminate the unlawful Deferred Action for Childhood Arrivals program implemented by the Obama administration without congressional approval.

Or the unsound decision Monday authored by Justice Neil Gorsuch where six of the nine justices took it upon themselves to legislate from the bench by rewriting and effectively amending the language of the Civil Rights Act of 1964 to include sexual orientation and gender identity—something Congress specifically has rejected.

It is also the justices’ refusal Monday to take a single one of the numerous Second Amendment cases filed with the court, requesting it to overturn the flawed decisions of federal appeals courts. Those courts held, for instance, that states are justified in not allowing you to exercise your right to bear arms outside your home unless you can prove you have “good reason” to do so.

As Justices Clarence Thomas and Brett Kavanaugh said in their dissent in one case, the refusal of states to allow citizens to practice their Second Amendment right outside their homes is a “ban on the ability of most citizens to exercise an enumerated right.”

It is the same as telling you that while you can exercise your First Amendment right of free speech to criticize the government when you are in your home, the government won’t allow you to do it out in public unless you can satisfy some government official that you have a good reason for voicing that criticism.

In the latest bad news from the court, Roberts joined the four liberal justices in holding that the Trump administration’s decision to end the DACA program was “arbitrary and capricious” under the Administrative Procedure Act because the administration supposedly had not given adequate reasons for ending the program.

As readers may recall, President Barack Obama in 2012 told his Department of Homeland Security to create the Deferred Action for Childhood Arrivals program.

DACA allowed illegal aliens who were minors when they came into the country to apply for a renewable, two-year reprieve from deportation and gave them work authorizations and access to Social Security and Medicare benefits. Between 700,000 and 800,000 illegal aliens eventually became qualified under the program and started collecting benefits paid for by taxpayers.

Two years later, the Department of Homeland Security tried to implement another program, again at Obama’s direction. It was called Deferred Action for Parents of Americans and Lawful Permanent Residents, or DAPA, and it also would have expanded DACA.

DAPA provided a similar administrative amnesty and access to government benefits for up to 4.3 million more illegal aliens.

When 26 states led by Texas sued over this second program, the Supreme Court (in a divided 4-4 opinion) affirmed a 5th U.S. Circuit Court of Appeals decision upholding an injunction issued against DAPA and the proposed expansion of DACA.

The 5th Circuit said the Obama administration’s program violated the Immigration and Nationality Act because it provided benefits to illegal aliens not authorized by Congress. And no one disputes that Congress has complete authority over immigration matters under the Constitution.

Based on the court holdings in the DAPA case and an opinion by then-Attorney General Jeff Sessions that DACA was unlawful because its defects mirrored those in DAPA, President Donald Trump’s Department of Homeland Security ended DACA in June 2017. The agency announced that it no longer would accept new applications or approve renewals except for those whose benefits were set to expire within six months.

As with almost every action taken by the Trump administration, opponents challenged the decision and courts issued nationwide injunctions halting the termination of DACA. The Supreme Court held Thursday that the rescission of DACA was “arbitrary and capricious” under the Administrative Procedure Act because the Department of Homeland Security didn’t give an adequate “policy” reason for ending the program.

But as Justice Samuel Alito said in a separate opinion concurring in the judgment in part and dissenting in part, DACA was “unlawful from the start, and that alone is sufficient to justify its termination.”

In other words, why in the world would you have to give public policy reasons for ending a government program that was set up illegally in the first place? The majority’s opinion, written by Roberts, make no sense.

Alito also expressed his frustration with the federal judiciary, pointing out:

[N]early 700 federal district court judges [have] blocked this rescission, and since then, this issue has been mired in litigation … and today, the Court still does not resolve the question of DACA’s rescission. Instead, it tells the Department of Homeland Security to go back and try again. What this means is that the Federal Judiciary, without holding that DACA cannot be rescinded, has prevented that from occurring during an entire Presidential term. Our constitutional system is not supposed to work that way.

Roberts also faulted the Department of Homeland Security for relying on the Sessions opinion. But as Thomas pointed out in a spirited dissent joined by Alito and Gorsuch, there was no need for the agency to provide any other reasons for ending a program when the attorney general’s opinion rightly said DACA was unlawful and that “this ultra vires program” should be rescinded. DHS was correct to rely on that opinion.

Thomas wrote, “These cases could—and should—have ended with a determination that [Sessions’] legal conclusion was correct.” Instead, Thomas said, “without grounding its position in either the APA or precedent,” the majority

declares that DHS was required to overlook DACA’s obvious legal deficiencies and provide additional policy reasons and justifications before restoring the rule of law. This holding is incorrect, and it will hamstring all future agency attempts to undo actions that exceed statutory authority.

Kavanaugh also dissented, arguing that the DHS decision was not arbitrary and capricious because the rationale provided by the agency was “reasonable and reasonably explained,” as was its reliance on prior court decisions and the attorney general’s opinion.

So the end result of this decision is to send the DACA question back down to the lower courts while the Department of Homeland Security once again comes up with another explanation and rationale for ending an illegal program that Obama didn’t have the constitutional or statutory authority to implement in the first place.

Such a waste of time and resources, and for what?

As Thomas correctly writes, this decision “must be recognized for what it is: an effort to avoid a politically controversial but legally correct decision” resulting from the “timidity” of the chief justice and his four cohorts that “forsakes the Court’s duty to apply the law according to neutral principles.”