It’s Not Just Central America: Where Illegal Immigrants on the Border Come From 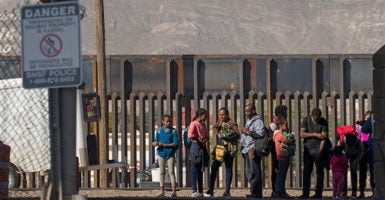 Migrants wait to be processed and loaded into a van by Border Patrol agents June 5 after being detained when they crossed illegally into the United States from Mexico at El Paso, Texas. (Photo: Joe Raedle/Getty Images)

The recent spike in illegal immigration from African countries underscores the increase in migrants coming from around the globe to sneak across the southern border—including more than 10,000 from Asia and almost 900 from Europe last year.

That’s more than twice the 211 total apprehensions during fiscal year 2018 of illegal border crossers from the continent.

Customs and Border Protection numbers from fiscal 2018 show significant numbers from other continents as well.

Of the total of 404,142 apprehensions, 248,690 were what the government classifies as “other than Mexicans,” or OTMs. Apprehensions of other Central Americans outpaced Mexicans for the third consecutive year, according to the Pew Research Center.

Those caught along the southern border mostly came from North and South America; that’s counting 155,452 from Mexico and 116,808 from Guatemala.

“We have always seen what’s classified as ‘other than Mexicans’ crossing the border, but the surge we are seeing now is because of the asylum loopholes,” Heritage Foundation national security expert James Carafano told The Daily Signal.

In fiscal year 2018, which ended Sept. 30, a total of 22,491 refugees resettled in the United States. The largest number came from the Democratic Republic of the Congo, followed by Burma, Ukraine, Bhutan, and Eritrea, according to Pew.

More than a quarter of them resettled in four states: Texas, Washington, Ohio, and California.

President Donald Trump announced Monday on Twitter that U.S. Immigration and Customs Enforcement “will begin the process of removing the millions of illegal aliens.”

Although Trump was vague about his order for ICE, Heritage’s Carafano said the president likely was referring to the more than 1 million illegal immigrants who remain in the United States despite a final deportation order.

Another 863 captured border crossers were from Europe, with the largest portion, 449, from Romania, according to the CBP numbers.

No other European country was the source of as many as 100 apprehensions. The Border Patrol captured 61 people from Turkey.

The continent of Australia accounted for only three of those caught.

The Middle East is a region of particular concern to Americans. But only 172 illegal immigrants from that volatile region, which spans parts of three continents, were captured at the southern border in fiscal 2018.

The new cooperation from Mexico in vetting border crossers will help, he said.

“Nobody is going to come from Asia to Mexico if they have to wait in Mexico for 18 months,” Carafano said. “But if all you have to do is come to Mexico … and a couple of weeks later cross the border and claim asylum, it’s worth the trip.”

The de facto U.S. policy of “catch and release” stems from existing laws and court precedents that say Border Patrol can’t detain for long any migrants who make an asylum claim or are accompanied by children.

Apprehended border crossers are given a court date, for which they frequently don’t show.

“The message being heard around the world is that if you bring a child as your passport, you are in,” Matt Sussis, a spokesman for the Center for Immigration Studies, which supports lower limits on immigration, told The Daily Signal.

“The commonality is that they fly from somewhere into South America and travel northward, often with the assistance of smugglers,” Sussis said.

The Center for Immigration Studies plans to release a study in coming weeks on how many illegal immigrants enter the United States from outside North and South America.

About 10.5 million illegal immigrants are in the United States, some 3.2% of the nation’s population, according to a report issued Monday by the Pew Research Center measuring immigration from fiscal years 2007 through 2017.

The Pew report asserts that 23% of the nation’s immigrant population is illegal.

In fiscal 2017, the Trump administration deported 295,000 illegal immigrants, the lowest number since 2006, according to Pew.

The years 2007 through 2017 saw a decline in illegal immigration by Mexicans, but an increase among other Central American countries, according to Pew.