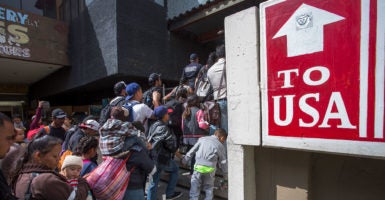 Immigration courts are too crowded with fraudulent asylum claims to devote resources to legitimate ones, according to a panel of immigration experts. Pictured: Members of a caravan of Central Americans ask authorities for asylum at the U.S. border on April 29, 2018, in Tijuana, Baja California Norte, Mexico. (Photo: David McNew/Getty Images)

Blame for a rising backlog of  immigration asylum claims at the southern border belongs with a dysfunctional system in which immigration judges don’t have the power to toss out meritless and fraudulent claims, a panel of experts said this week.

John Hostettler, vice president of federal affairs for the States Trust intiative at the Texas Public Policy Foundation, said the crisis of illegal immigrants at the U.S. border with Mexico is an asylum crisis.

The system allows immigrants to apply for legal status after fleeing violence or persecution in their home countries, Hostettler noted during a panel discussion Tuesday at the Capitol Hill headquarters of The Heritage Foundation.

“Individuals are coming to the border, and they’re being coached to find someone along the border in a green uniform and make a claim for asylum, because they know that once they get on American soil, they can make that claim for asylum,” Hostettler said.

The asylum system acts as a magnet for illegal immigration, he said. While acknowledging that some migrants have legitimate claims, he said many who apply are simply looking for better jobs.

Hostettler, a former congressman from Indiana, was joined on the panel by Heritage senior legal fellows Hans von Spakovsky and Charles Stimson for a discussion entitled “Securing the Border and Restoring Law and Order.”

Although a barrier along the southern border is helpful in deterring illegal immigration, it’s far from a complete solution, Hostettler said.

“While the wall will be a benefit, it will not be an end-all, be-all if we continue to allow asylum to be abused by so many people that are coming to the United States,” he said.

Hostettler cited a new study from the Austin-based Texas Public Policy Foundation that found that border security depends not just on stopping illegal immigration, but also on effectively turning back unlawful migrants and deterring illegal crossings.

The study examined available metrics used to measure immigration and argues for improvements in the way officials track border security and asylum claims.

Stimson, who manages the National Security Law Program at Heritage, said giving immigration court judges more power to manage case dockets is the most important step that could be taken toward reforming asylum laws.

“Immigration judges have no teeth,” Stimson said, arguing that those judges lack tools available in civil courts to manage a “constipated court system that has over a million cases.”

“Our pro-immigration policy says that if you have a viable asylum claim, come to America,” Stimson said. “In that court system, your case will get the due process and the respect it deserves. What happens today? Those cases get bundled in with all these worthless, meritless cases.”

If immigration judges had the authority to dismiss frivolous cases and to hold people in contempt of court, he said, up to half of all cases could be thrown out instead of taking years to wend their way through the system and the appeals process.

Von Spakovsky, who also manages the think tank’s Election Law Reform Initiative, explained that state and federal courts give authority to their judges to dismiss cases with no legal merit, a power that immigration courts lack.

As a result, he said, urgent and legitimate asylum claims are delayed due to the sheer number of baseless cases that swamp immigration courts and add to the already enormous backlog.

We take in 1.1 million legal immigrants a year. That’s more than any other country. The fact that we believe in enforcement of our laws against illegal immigration does not mean we’re anti-immigrant. It means we’re in favor of what makes America a unique nation, and it’s the reason why so many people want to come here—because we are a nation based on the rule of law.

The panel also discussed state laws that have been upheld in court that are designed to curb fraudulent asylum claims.

These include Arizona’s requirements that businesses verify the legal status of employees and that motorists document legal residency when applying for a license plate.