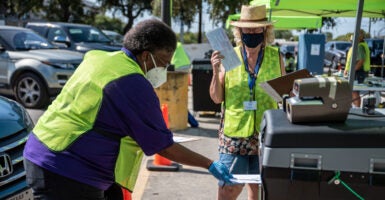 Like Alice in Wonderland, it feels like we’re living in an upside-down world. Except now it is Alice in “Pandemicland.”

Government officials have been forced to respond to the threat posed by COVID-19, some in a good way, but too many in a bad way.

Unfortunately, even those who mean well need to be reminded that our Constitution contains no “pandemic exception,” and that includes in the area of elections.

Federal judges need that reminder, too. For example, on Oct. 12, three Trump-appointed judges from the 5th U.S. Circuit Court of Appeals made this exact point when they dissolved a federal district court’s order that would have allowed Texas counties to place multiple, unmonitored absentee ballot drop boxes in unsecured locations, in violation of state law.

Fifth Circuit Judge Kyle Duncan, writing for himself, and Judges Don Willett and Jim Ho—all three of whom have been mentioned as potential Supreme Court nominees—stayed a lower court ruling that claimed that Texas Gov. Greg Abbott’s order, which limited ballot drop boxes to “a single early-voting clerk’s office location [in each county],” was unconstitutional.

The three judges found that the governor’s proclamation “abridges no one’s right to vote.”

In fact, they noted that Abbott had, indeed, expanded voters’ ability to cast ballots:

In response to the coronavirus pandemic, Texas Gov. [Greg] Abbott has issued various proclamations about the upcoming November election. Among other things, these measures have expanded the options for Texans to vote in-person or to vote by absentee ballot.

Take, for instance, early in-person voting. Normally, early voting would have started Oct. 19. Now it will start Oct. 13, six days earlier. Or, take absentee (‘mail-in’) ballots. Normally, if a voter wanted to hand-deliver her mail-in ballot, she would have had only one day to do it—Election Day. Now, under the governor’s expanded policy, she can deliver the ballot anytime until Election Day.

That effectively gives voters forty extra days to hand-deliver a marked mail-in ballot to an early voting clerk. And the voter still has the traditional option she has always had for casting a mail-in ballot: mailing it. …

The controversy we now face involves the rules for hand-delivering absentee ballots … a few large Texas counties wanted to set up multiple delivery locations for these ballots. The governor disagreed with this policy, which, in his view, threatened election uniformity and security. …

A coalition of plaintiffs sued, claiming the [governor’s] proclamation violated their right to vote by restricting absentee voting options.

It was clear to the appellate court that the district judge had “vastly overstated the ‘character and magnitude’ of the burden allegedly placed on voting rights.”

Indeed, said the court, “one strains to see how it burdens voting at all” since the governor had significantly expanded opportunities to vote with absentee ballots “well beyond the stricter confines of the [Texas] Election Code.”

In fact, in a footnote to his opinion, Duncan noted, with some hesitation, the broad executive emergency powers exercised by Abbott in this case relative to voting:

As noted, Gov. Abbott has taken unprecedented steps in the wake of COVID-19 to expand voting opportunities generally, and mail-in voting options specifically. In taking these (and other) pandemic-driven actions, the governor has invoked his broad emergency powers under the Texas Disaster Act.

No party questions the constitutional limits of that Act—unsurprisingly, as this case is about loosening restrictions during a public-health emergency, not imposing them. But a different case may require courts to confront head-on the constitutional extent of gubernatorial power under the Texas Disaster Act.

Neither the United States nor Texas constitution includes a pandemic exception … All public servants, no matter how well-intentioned, must heed federal and state constitutional constraints.

While desperate times permit desperate measures, we must resist defining desperation down.

Ho pressed his concerns more forcefully when he “grudgingly” concurred in the judgment. He did so because he “firmly agree[d] that the federal district court usurped the authority that our Constitution vests in state legislatures to set the rules governing federal elections. But so did the governor of Texas … ”

He went on to say that:

Ho made clear that “under the Constitution, it is the state legislature—not the governor or federal judges—that is authorized to establish the rules that govern the election of each state’s presidential electors, U.S. senators, and U.S. representatives.”

Additionally, Ho reiterated his previous statement that “courts have repeatedly found that mail-in ballots are particularly susceptible to fraud.”

He noted that “numerous courts agree,” specifically citing Griffin v. Roupas, where the 7th Circuit Court of Appeals said: “Voting fraud is a serious problem in U.S. elections generally … and it is facilitated by absentee voting. … [A]bsentee voting is to voting in person as a take-home exam is to a proctored one.”

That is certainly demonstrated by The Heritage Foundation’s Election Fraud Database, which has numerous examples of proven absentee ballot fraud cases. Four such cases are also described in detail in a recent Heritage report, “Four Stolen Elections: The Vulnerabilities of Absentee and Mail-In Ballots.”

Moreover, the Texas attorney general has just charged four people, including a county commissioner, in Gregg County with election fraud involving absentee ballots, while also arresting a mayoral candidate in the city of Carrollton in another absentee ballot fraud scheme.

Regardless, the 5th Circuit got it right that a federal judge certainly isn’t the appropriate person to rewrite or second guess a state’s election-related decisions—especially this late in the game.