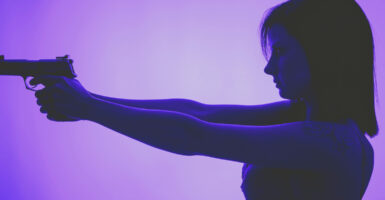 In one of a dozen examples of defensive gun use reported in September, a woman fatally shot her boyfriend when he threatened to kill her and tried to locate the legally purchased firearm in her home. (Photo illustration: Dennis Aglaster/EyeEm Getty Images)

The Supreme Court has spent over a decade quietly acquiescing to gun control advocates at the expense of the Second Amendment. Commentators on both sides of the aisle, however, believe that may change soon.

If Judge Amy Coney Barrett—President Donald Trump’s nominee to fill the seat of the late Justice Ruth Bader Ginsburg—is confirmed to the Supreme Court, she is likely to provide a vital fifth sure vote in defense of the right to keep and bear arms.

Barrett’s judicial history on the U.S. Court of Appeals for the 7th Circuit demonstrates a solid originalist approach to the Constitution in general, and the Second Amendment in particular.

Her brilliant dissent in the 7th Circuit case of Kanter v. Barr reflects not only a faithful adherence to the Second Amendment’s text, history, and tradition, but reasserts the importance that the Founding Fathers attached to the right to keep and bear arms. Every day, citizens all over the country exercise this right in defense of themselves and countless others.

The examples below represent only a small portion of the news stories on defensive gun use that we found in September. You may explore more examples by using The Heritage Foundation’s interactive Defensive Gun Use Database.

These examples of defensive gun use in September demonstrate the importance of protecting Second Amendment rights.

They also remind us that taking away a person’s Second Amendment rights is a very serious thing that, as Barrett’s dissent explains, can be justified only under the most serious of circumstances.

Hopefully, Judge Barrett soon will be Justice Barrett, and the Supreme Court will have a reliable fifth vote to secure Americans’ Second Amendment rights against the whims and political power grabs of gun control advocates.