The Supreme Court Punts on an Easy Second Amendment Case 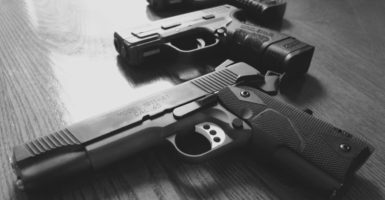 A New York City law required that all would-be handgun owners go through a lengthy and rigorous permitting processing in order to possess a handgun in their own homes. (Photo: Emily Fennick/EyeEm/ Getty Images)

It’s been a decade since the Supreme Court affirmed, in District of Columbia v. Heller (2008) and McDonald v. City of Chicago (2010), that the Second Amendment protects an individual and fundamental right, striking down laws that effectively prohibited the possession of handguns in one’s own home.

Since then, the court has routinely declined to address many questions left unanswered by these opinions. Lower courts have often taken advantage of that silence to erode the foundations of Heller and McDonald, upholding many gun control laws that seemed constitutionally dubious.

Many Second Amendment advocates were hopeful, however, when the Supreme Court granted certiorari in New York Rifle & Pistol Association v. City of New York last year to hear in this current term.

It appeared that the court was primed to issue its first significant Second Amendment ruling in 10 years and perhaps establish a legal framework that would help prevent future Second Amendment abuses.

Unfortunately, that was not to be. In a 6-3 decision, a majority of the justices essentially washed their hands of the case, sending it back down to the lower courts without ruling on the merits.

So, what was this case about? What did the dissenting justices say? What might be next for the court and the Second Amendment?

The New York Rifle & Pistol Association case dealt with the scope of the Second Amendment’s protection outside the home, though not with the particular issue of concealed carry.

A New York City law required that all would-be handgun owners go through a lengthy and rigorous permitting processing in order to possess a handgun in their own homes.

This “premises permit” allowed handgun owners to keep the firearm in their home, but they were otherwise unable to transport their handguns anywhere except to one of seven gun ranges inside city limits.

The law was so strict that handgun owners could not even transport the gun to a second home or to a closer gun range outside city limits, even if the handgun was unloaded and stored in a hard-sided, locked container, unable to be immediately accessed by the owner.

In 2013, lawful handgun owners in New York City sued the city, claiming that the law violated the Second Amendment.

The city maintained throughout years of litigation that the law was constitutional, and that even if its law did infringe on the petitioners’ Second Amendment rights, it was still constitutionally permissible because it was “necessary to protect the public safety.”

Despite the city’s adamant declaration that the ordinance was constitutional and completely in line with the Supreme Court’s Second Amendment precedent, it refused to defend the law before the nation’s highest court.

Instead, shortly after the Supreme Court agreed to review the case, the city slightly amended its laws to allow gun owners to transport their handguns to out-of-city ranges or to a second home.

The city admitted that the amendment was motivated, at least in part, by a desire to avoid Supreme Court review of a law many thought would be struck down under Second Amendment precedent.

Although the majority’s reasoning isn’t entirely clear, it appears that it determined the case was now moot—in other words, the controversy it originally agreed to decide no longer existed because the law had been changed.

To the extent that there were questions or controversies over the new law, the parties would have to relitigate the case in the lower courts.

Alito’s well-reasoned dissent, which Gorsuch joined in full and Thomas joined in part, explained that these justices would not have held that the case was moot simply because New York City slightly amended the law.

Under existing precedent, cases are only declared moot when “it is impossible for a court to grant any effectual relief whatever to the prevailing party.” And the dissenters rightly point out that the amended law did not, in fact, give the petitioners in the case everything they sought.

While the petitioners asked for “unrestricted access” to out-of-city ranges, competitions, and second homes, the amended law does not clearly grant it, since there is no real indication about where the city now draws the line for “reasonably necessary” travel.

The case cannot possibly be moot if “the City still withholds from the petitioners something that they have claimed from the beginning is their constitutional right.”

Moreover, the dissenting justices noted that the Supreme Court has been particularly wary of declaring a case moot where—such as here—one party attempts to “manufacture mootness” in order to avoid an adverse court decision.

Finally, the dissent moved on to address the merits of the case, which they described as “not a close question.” The law clearly violated the Second Amendment, as outlined in Heller and McDonald.

The city could point to no evidence of laws in force during the country’s founding era that prevented gun owners from practicing outside of city limits.

In a section not joined by Thomas (likely because he believes the historical argument is the end of the matter), Alito and Gorsuch called the city’s public safety arguments “weak on their face” and completely unsubstantiated by the evidence.

As another bright note on an otherwise frustrating outcome, Justice Brett Kavanaugh wrote a concurring opinion stating that although he agreed with the majority about the procedural issues of mootness, he shared the dissent’s concern about how some lower courts have treated the Second Amendment. In his opinion, the court should “address this issue soon.”

This outcome is certainly disappointing to Second Amendment advocates, many of whom thought that if the court was going to dismiss the case as moot, it should have done so much earlier, allowing time to grant and hear another Second Amendment case this term.

As it stands, the earliest the court would hear another Second Amendment case, should it grant certiorari in one, is in its next term, which begins in October.

Importantly, many of the court’s pending Second Amendment cases were distributed for conference this week, meaning that the justices may soon discuss whether to grant certiorari in any of them.

Several of those cases would give the court ample opportunity to address very significant Second Amendment questions. They largely involve laws that state or local governments would likely be less eager to amend in order to avoid review.

For example, both Wilson v. Cook County, Illinois, and Worman v. Healey involve challenges to bans on so-called “assault weapons,” which are in reality semi-automatic firearms commonly owned by law-abiding citizens and used for lawful purposes.

Cases such as Rogers v. Grewal, out of New Jersey, and Malpasso v. Pallozzi, out of Maryland, would allow the court to review laws that limit concealed carry permits only to applicants who can show “good cause” above and beyond a general need for self-defense.

There is also Pena v. Horan, which challenges a California law requiring all new handguns sold in the state to be “microstamped” in a way that is not possible with current technology.

While it was disheartening to see the Supreme Court give in so easily to New York City’s legal antics, the pain would be very much salved should the justices immediately take up a new Second Amendment case that promises to address equally significant questions.

The nation can’t afford another decade of silence while states erode this fundamental right.