The Dallas Cop Shooting Was Horrific. It Also Has Nothing to Do With the Second Amendment. 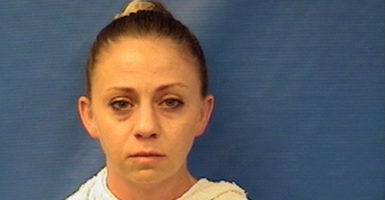 The officer—since identified as Amber Guyger, a four-year veteran of the Dallas Police Department—was also a resident in the same apartment complex, and claims she shot Jean after walking into the wrong apartment and mistaking him for a home invader.

Some have rightly questioned why Guyger was charged with the lesser offense of manslaughter instead of murder. Others have pointed to this incident as evidence that even lawful gun owners are dangerous, and therefore stricter gun control measures are needed on a broad scale against all law-abiding citizens.

Dana Loesch is an idiot.
Botham Jean was killed due to an irresponsible "good guy" with a gun. If Botham Jean was a gun owner and shot back at the cop, then Botham Jean would've still been killed and blamed for shooting at a cop. #LoserDanaLoesch https://t.co/Jt7dpm5PnA

absolutely horrid. even after a twelve hour shift, my instinct is never to pull out a gun and kill someone. justice for botham shem jean. stronger gun control. even for police. because absolute power is corrupt. and that’s what police seem to have right now whether on or off duty https://t.co/dEaiDDsaVp

Botham Shem Jean’s death last night was murder. And the woman who killed him needs to be arrested and charged.

But let’s also consider this: In a sane society, with smart gun control, a police officer would check her gun in at the station at the end of a shift.

It’s important to analyze this situation more closely through both of those lenses.

Guyger Probably Should Be Charged With Murder

Prosecutors have charged Guyger with manslaughter, and will present the case to a grand jury, which could—and probably should—recommend the charge be upgraded to murder.

Texas law doesn’t require an element of premeditation or malice for the offense of murder. Instead, to be guilty of murder, a person must only (1) intend to cause serious bodily injury and (2) commit an act clearly dangerous to human life that (3) causes the death of an individual.

In other words, Guyger needn’t have planned on killing Jean prior to entering his apartment in order to be guilty of murder—she need only have intentionally fired her gun at him while intending to cause serious bodily harm without a legal justification, such as acting in self-defense.

Self-defense arguments require not just that a person feared imminent death or serious bodily injury, but also that this fear was reasonable under the circumstances. In Texas, a person is presumed to have a reasonable fear in a wide variety of situations, including when he uses lethal force against someone who unlawfully entered his home.

There is, however, a major problem with that presumption in this context: Jean didn’t unlawfully enter Guyger’s home. On the contrary, Guyger unlawfully entered Jean’s home—mistakenly, she claims. Guyger must therefore make what is called an “imperfect self-defense” claim, admitting that her actions played a role in making “self-defense” necessary, while also showing that her mistake of the factual situation was reasonable.

Guyger is likely to face an uphill battle on such a claim. First, initial testimony from Jean’s neighbors indicates that Guyger’s version of events may be misleading, thereby damaging her credibility. Second, a significant amount of evidence suggests that Guyger’s beliefs and actions may have been unreasonable, even if her story is accurate.

Guyger claims that she parked on the wrong garage level and that the apartment door opened up just as she placed her key in the lock of what she believed to be her apartment. At least one witness, however, reported hearing a woman knock on the door while saying, “Let me in! Let me in!” prior to the gunshots.

Guyger’s version of events has also changed, particularly as to whether the door was unlocked or simply ajar. The plausibility of either of those situations occurring is doubtful, since the doors in question are operated by an electronic key, much like in a hotel, and can’t simply be left “unlocked.”

Residents from the apartment complex have also posted videos of the way their doors automatically swing shut, making it unlikely the door was inadvertently left ajar.

Further, the apartment doors between Jean’s unit and the elevator are distinctly decorated, making it difficult to believe someone who lived in the apartment complex wouldn’t recognize she was on the wrong floor. Jean’s apartment unit also prominently features a red doormat—a far-from-subtle indicator to Guyger that it wasn’t her apartment.

Finally, Guyger’s claim that it was reasonable for her to draw her weapon and fire in that situation, even if it occurred exactly as she described, is problematic.

She claims the apartment was so dark that she couldn’t realize it wasn’t hers, and that she merely saw a “large silhouette,” which she took to be an intruder. She then fired two shots with extreme accuracy across this allegedly very dark apartment when the barely visible figure didn’t comply with her demands.

Whether that story and chain of events is sufficient to convince a jury that she acted reasonably is far from certain.

There are, however, indications that Guyger may have been exhausted after working a 15-hour shift, and while a reasonable civilian may not have used lethal force in this situation, Guyger was a police officer with a trained instinct to do so.

Not Evidence Against Lawful Gun Ownership

This shooting, even if determined by a jury to be noncriminal, is tragic and likely could have been prevented with the exercise of reasonable circumstantial awareness. But the inappropriate use of lethal force in one situation doesn’t negate the reality that Americans use their firearms in defense of self and others between 500,000 and 3 million times every year.

It’s irresponsible to use this incident to promote broad restrictions on lawful gun ownership by otherwise law-abiding citizens. Consider the following:

Judd is absolutely correct. These stories of Americans using their Second Amendment rights to defend themselves and others truly sum up why law-abiding citizens own firearms and jump through the administrative hoops to get their concealed carry permits. They are fundamentally good people who are willing and able to stop bad people who are doing bad things.

Tragic injustices happen. Lawful gun owners sometimes make mistakes. Sometimes, they even intentionally commit crimes. But they are not the primary source of gun violence, and the total impact of lawful gun ownership skews heavily in favor of maintaining a strong, meaningful Second Amendment right.

Guyger probably should be charged with murder. Other gun owners should not be condemned and punished for her careless actions.