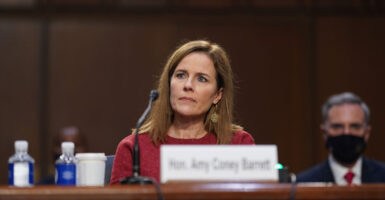 As an originalist, Supreme Court nominee Judge Amy Coney Barrett wouldn't change the meaning of the Second Amendment protection just because gun control activists wish it to be so. Pictured: Barrett testifies Tuesday before the Senate Judiciary Committee on the second day of her Supreme Court confirmation hearings. (Photo: Kevin Dietsch/Pool/Getty Images)

This op-ed is part of a series exploring the writings and jurisprudence of Judge Amy Coney Barrett, the president’s nominee for the U.S. Supreme Court.

As the Senate Judiciary Committee holds confirmation hearings this week for Judge Amy Coney Barrett, President Donald Trump’s nominee to the Supreme Court, it’s a good time to take a deep look at one way some already have tried to attack her: her Second Amendment jurisprudence.

If many gun control activists are to be believed, Barrett, a judge on the U.S. Court of Appeals for the 7th Circuit, is a “gun rights extremist.” She personally would give machine guns to violent felons if given the chance. Her confirmation would push the nation into a crisis of gun violence.

Fortunately, these claims are all just as bombastic and unserious as they sound.

Although gun control activists certainly have good reasons to fear the confirmation of Barrett, anyone truly concerned with safeguarding the protections laid out in the Bill of Rights should celebrate.

1. Barrett is an originalist, not an ‘extremist.’

Barrett, like all good judges, knows that her job is to take the clear meaning of a statute or constitutional clause and apply it fairly to the facts of the case, regardless of whether she personally likes the outcome.

If Barrett is “extreme” with respect to the right to keep and bear arms, it’s only because the Constitution itself offers an “extreme” protection of that right. As an originalist, she would not change the meaning or extent of that protection just because gun control activists—or any other activists—wish it to be so.

This is a good thing for Americans concerned with safeguarding constitutional protections, including those found in the Second Amendment.

Granted, many gun control advocates never have met a gun control law they thought wasn’t constitutionally permissible, including a complete ban on owning handguns. It is hardly surprising, then, that they would find a judge’s judicial philosophy “extreme” if it threatened the imposition of any measure of gun control whatsoever.

And, certainly, the original meaning of the Second Amendment serves as a massive hindrance to many of the gun control measures commonly called for by left-wing politicians.

But recognizing that doesn’t make Barrett “extreme.” It makes her restrained and unwilling to unilaterally change the Constitution’s meaning to further her personal policy preferences.

2. No, Barrett didn’t rule that we must ‘give machine guns to violent felons.’

This has been one of the most enduring and pernicious of the slanders cast upon Barrett’s Second Amendment jurisprudence. It comes from a complete mischaracterization of her dissent in the 7th Circuit case of Kanter v. Barr, where she provided a brilliant lesson in Second Amendment originalism.

The case did not involve the Second Amendment rights of violent felons, at all. Instead, it dealt with the question of whether the Constitution permits a lifetime ban on the right to keep and bear arms for nonviolent felons.

Rickey Kanter pled guilty to a single count of federal mail fraud for sending medical shoe inserts to customers while falsely claiming the inserts were approved by Medicare. At no point has the government alleged that Kanter poses a danger of violence to himself or to the public.

Nevertheless, the confluence of federal and state law meant that, absent a presidential pardon, Kanter was under a lifetime revocation of his right to keep and bear arms.

The two-judge majority in the case upheld this lifetime prohibition, reasoning that the law survived “intermediate scrutiny” because it “is substantially related to an important governmental objective.”

Barrett’s dissent, following in the footsteps of Justice Antonin Scalia’s opinion in District of Columbia v. Heller, delved deeply into the text, history, and tradition of the Second Amendment. She did not—contrary to the allegations of gun control activists—conclude that violent criminals may not be disarmed.

Rather, Barrett recognized that the authority of the government to disarm was historically and rationally limited only to those individuals who were, unlike Kanter, actually dangerous. She wrote:

History is consistent with common sense: it demonstrates that legislatures have the power to prohibit dangerous people from possessing guns. But that power extends only to people who are dangerous. Founding-era legislatures did not strip felons of the right to bear arms simply because of their status as felons. Nor have the parties introduced any evidence that founding-era legislatures imposed virtue-based restrictions on the right; such restrictions applied to civic rights like voting and jury service, not to individual rights like the right to possess a gun. In 1791—and for well more than a century afterward—legislatures disqualified categories of people from the right to bear arms only when they judged that doing so was necessary to protect the public safety.

This is not some extreme, outlandish position. In fact, roughly a year before this decision, I published a Heritage Foundation legal memo on this exact same prohibition, coming to the exact same conclusion about its unconstitutional nature. I am far from the only legal scholar to do so.

Moreover, this conclusion is amply supported by the history of felon disarmament itself—it was not until the 1960s that the federal government extended the loss of the Second Amendment right to include nonviolent felons, as opposed to  violent felons only.

3. Barrett would not ‘put the nation in danger from gun violence.’

A common scare tactic of some gun control activists has been to allege loudly and repeatedly that Barrett’s nomination would result in a nightmarish surge of gun violence.

Although it is almost certain that a Justice Amy Coney Barrett would stand in the way of many commonly proposed gun control laws, the reality is that most of these proposed measures are not just unconstitutional—they’re largely ineffective ways of combating gun-related violence.

Most forms of gun control share a common feature of being grossly ineffective at combating gun violence, because those laws are based on faulty assumptions about gun-related violence and the willingness of hardened criminals to obey such measures.

Gun control activists are right to fear what the confirmation of Barrett might mean for their gun control agenda. They are wrong, however, to slander her, mischaracterize her judicial record, or frighten the nation with false promises of a future gun violence apocalypse.

The confirmation of Barrett to the nation’s highest bench may well be a tremendous moment for the future of the Second Amendment. But it’s not because Barrett is an “extremist.”

It is, rather, because she is willing to heed the dictates of the Constitution. In a recent opinion, Justice Clarence Thomas lamented the Supreme Court’s “decade-long failure to protect the Second Amendment.”

Perhaps with the Senate’s confirmation of Barrett, that may at long last change.