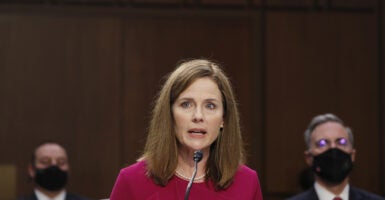 Supreme Court nominee Amy Coney Barrett described her nomination process Tuesday, saying that she has attempted to avoid media during the “excruciating” time.

Barrett, a federal judge for the 7th U.S. Circuit Court of Appeals, brought up her feelings on the nomination process Tuesday morning on the second day of her confirmation hearings on Capitol Hill where senators began questioning the nominee.

“I have tried to be on a media blackout for the sake of my mental health, but you cannot keep yourself walled off from everything,” Barrett said Tuesday morning. “I am aware of the caricatures floating around. I think what I would like to say in response to that question is that I have made distinct choices. I decided to pursue a career and have a large family. I have a multiracial family, our faith is important to us.”

Barrett said she has a “life brimming with people” who make different choices than her, but she has never attempted to “impose” her choices on them.

“The same is true professionally,” she said.

“I do not think it is any secret to any of you or the American people this is a difficult, some might say excruciating, process,” she said. She said she and her husband, Jesse, “had a brief amount of time to make a decision with momentous consequences for our family.”

“We knew that our lives would be combed over for any negative detail, we knew our faith would be caricatured, our family would be attacked, and so we had to decide whether those difficulties would be worth it,” Barrett said. “Because what sane person would go through that if there was not a benefit on the other side?”