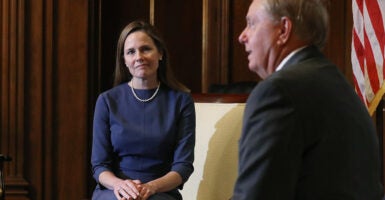 The second day of Judge Amy Coney Barrett’s confirmation hearings begin Tuesday morning. GianCarlo Canaparo, a Heritage Foundation legal fellow and co-host of the “SCOTUS 101” podcast, joins our show to discuss what to watch for and what questions he hopes Senate Judiciary Committee members will ask Barrett.

Canaparo also previews how he and Heritage colleague Amy Swearer plan to cover the confirmation hearings on “SCOTUS 101.”

Also on today’s show, we share a “good news story” about The Daily Signal’s recent trip to Kenosha, Wisconsin, to see how the community there is coming together to recover after rioters burned and looted many of the city’s businesses at the end of August.

The “Daily Signal News” podcast is available on Ricochet, Apple Podcasts, Pippa, Google Play, and Stitcher. All of our podcasts may be found at DailySignal.com/podcasts. If you like what you hear, please leave a review. You also may leave us a message at 202-608-6205 or write us at [email protected] Enjoy the show!

Virginia Allen: I am joined by GianCarlo Canaparo, co-host of the podcast “SCOTUS 101” and a legal fellow at The Heritage Foundation. GianCarlo, thank you so much for being here.

GianCarlo Canaparo: Thanks for having me back, Virginia.

Allen: So, today begins the second day of the Senate Judiciary hearing for Judge Amy Coney Barrett. Yesterday, senators gave some opening statements. Can you just give us a 30-second summary of how these confirmation hearings work?

Canaparo: What you’ve got, basically, is senators trying to accomplish something.

What Democrats predominantly are going to be trying to do is trying to get Amy Coney Barrett to reveal how she’s going to rule on cases and issues that are important to them. And if Judge Amy Coney Barrett follows the example set down by every other Supreme Court nominee since at least Felix Frankfurter in 1939, she’s not going to tip her hand.

And so, you’re going to have this sort of tedious tug of war, to be perfectly frank, between Democrats trying to trip her up with gotcha questions and trying to extract how she’s going to rule.

Canaparo: What I want to see from Judge Barrett is a commitment to judicial method of textualism and originalism. I want to see that she believes it is not the judge’s role to impose her personal beliefs on the law.

What I would love to see is a really honest and frank discussion about [the] judicial process, judicial methodology, the importance of maintaining the integrity and independence of the judiciary. I don’t expect I’m going to see much of that from the senators, though.

Allen: GianCarlo, as a Supreme Court expert, if you were sitting on the Senate Judiciary Committee, what would be the questions that you would want to ask Barrett today?

Canaparo: Well, above all else, what I would want to get at is her judicial philosophy and her judicial method.

We are not going to get answers on how she’s going to rule on substantive cases. She’s going to follow what’s commonly called the “Ginsburg Rule,” although it actually predates [the late Justice Ruth Bader] Ginsburg, that she’s just not going to opine on issues that are going to come before the court.

But other people have not been as steeped in her record as I have. And so, I would tease that out just so that the people watching can see that, yes, indeed, she is very committed to a textualist, originalist methodology and that her personal beliefs don’t dictate how she’s going to rule from the bench.

Allen: And what are you looking for from the senators? And are there particular senators on the judiciary hearing committee that you’re going to be paying very close attention to during this hearing?

Canaparo: Well, what I’m looking for really is sort of a lack of something. From previous confirmation hearings, we’ve seen just a lot of nonsense.

The last time Amy Coney Barrett was up, we saw attacks from, notably, Sen. [Dianne] Feinstein, … who said that, “Dogma lives loudly within you.” And there’s this undercurrent to a lot of the questioning from Democratic senators, that the idea that because Barrett is a Catholic, she’s going to use her Catholic faith to decide cases rather than the law.

Of course, that’s based on nothing but conjecture. And it’s belied by Amy Coney Barrett’s record, both as an academic who wrote about the court and as a judge for three years on the 7th circuit.

So I guess that’s what I’m looking for. I’m hoping I don’t find it, but I know I will. And when it comes to particular senators, I’ll be paying attention to Sen. Feinstein to see if she reprises the attacks she made, or if she’s learned better.

And then always sort of the wild card to look out for is Sen. Mazie Hirono, who often pursues these lines of attack, but with significantly less, I suppose you could say, finesse or tact than other senators do. So, her questions tend to be amusing.

Allen: GianCarlo, how long will these hearings last?

Canaparo: The hearings are scheduled to go from Monday through Wednesday. And the questions on Tuesday, every senator on the committee will have 30 minutes to question Barrett. And then on Wednesday we’ll have another day with 20-minute rounds of questioning.

Allen: Historically, what is the timeline of a Senate Judiciary hearing and vote? Because we’re hearing a lot of voices on the left say that this is all happening very, very quickly. But comparatively speaking, is this a pretty normal timeline as far as the confirmation, and then the hearing, and then the possible dates for a vote toward the end of the month?

Canaparo: Oh, yeah. This is a very normal schedule for recent history. But when you put this in perspective of longer history, actually, our confirmation processes these days, especially in the last 20 years, are sometimes incredibly long.

It used to be the case that this whole process from nomination to confirmation averaged you less than 20 days. Justice Byron White, for instance, was nominated and confirmed in a matter of weeks. And he was voted on by the Senate, confirmed by the Senate after his committee hearing, which lasted only 90 minutes, and was confirmed by a mere voice vote.

So it used to be a lot smoother process than today. But even by today’s standards, this is a very normal timed process.

Allen: So then what has changed to make it quite a different timeline and often take much longer than it used to?

Canaparo: A few things. For one, there’s the normalization of doing hearings and making them public. That actually, it didn’t start really until 1939 with Felix Frankfurter. And even then it didn’t happen for everybody thereafter.

Allen: Fascinating. So, you co-host The Heritage Foundation podcast “SCOTUS 101” with Amy Swearer. Can you tell us a little bit about your podcast and how you all are going to be covering this hearing in depth?

Canaparo: Sure. So, the podcast covers everything Supreme Court, from the latest news to the latest opinions, what’s happening at oral argument. And every week we have a guest on, whether it’s a professor, an advocate, or judges on the lower courts.

In our recent episode that came out last week, we had our colleague Tom Jipping on, and Tom Jipping is a longtime veteran of the Senate Judiciary Committee. He’s an expert on the confirmation process. So, he walked us through that: What has it looked like historically? What’s the road ahead for Amy Coney Barrett here? How does this compare to various areas in history?

And then, next week, we’ll also be doing another deep dive into confirmation history—and the question of, is it different? Is it really different today than it used to be? Is it more contentious? Are they more political?—with Ilya Shapiro from the Cato Institute, who just finished a book on this subject.

Allen: So a lot going on, a lot happening over at the Supreme Court.

Canaparo: There sure is.

Allen: Great. All right. I want to circle back for a second to Judge Barrett’s confirmation hearing. What are your thoughts on the vote? I mean, right now, I think, if all, more or less, goes according to plan, it looks like the Senate will vote to confirm Barrett. But do you have any insight on this?

Canaparo: No, besides … I mean, you put it right. It looks like she’s going to get confirmed.

Part of the problem is that we’ve already had many Democratic senators who have already said they’re opposed to her, regardless of what happens at the hearing, regardless of her qualifications, just because she’s a Trump nominee and just because the politics surrounding this, they’re not going to vote for her. So you sort of wonder, “Why are we even going through this rigmarole?” But I guess we have to.

But there’s no indication that Republican senators are going to balk at her nomination or vote against her, every indication that all the Democrats will. And so, it will come down to … assuming all the senators who are presently out with COVID can get back, we’ll have a tight party-line vote.

Allen: I was fascinated to see that they are holding the hearing. It’s kind of a mixture of senators participating virtually and, of course, in person. I think that’s going to be a fascinating situation, seeing for the first time what that looks like to have senators sort of on screens, weighing in and asking questions.

Canaparo: It’s actually not the first time that this has happened.

Canaparo: In fact, just in the last six months, various Senate committees have conducted more than 150 of these hybrid hearings.

Allen: OK. So they’re old hat at this now.

Canaparo: Yeah. In fact, the Judiciary Committee has done about 23, if memory serves, 23 of these just recently, including ones on other judges for the lower courts. So this is normal for them now.

Allen: OK. But this will be the first time for a Supreme Court nominee, correct?

Allen: OK, OK. Fascinating. We are in, I think, for a wild week. GianCarlo, we just so appreciate your insight in this field. And again, we definitely encourage our listeners to check out your podcast, “SCOTUS 101.”

Canaparo: Thanks so much for having me on, Virginia.