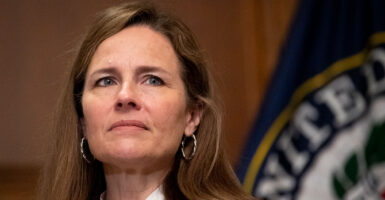 Judge Amy Coney Barrett has been a judge on the 7th U.S. Circuit Court of Appeals for three years, and in that time has participated in more than 200 criminal cases. These cases are an important window into her jurisprudence because criminal law provides one of the simplest and clearest views of what the Constitution means in practice.

The stakes could hardly be higher. On the one hand, you don’t want to let criminals free to harm people, but neither do you want to deprive anyone of their freedom unjustly.

To balance these weighty concerns as fairly as possible, we have built up a justice system comprised of procedures, rules, and standards. Its purpose is to be neutral and less fallible than the individuals—police, lawyers, witnesses, and judges—that participate in it. In other words, greater than the sum of its parts.

At the top of this system sit appellate judges like Barrett, and their paramount job is to guarantee the integrity of the system.

For example, she holds district court judges to the highest standards of impartiality and has reversed lower court judges when they have allowed lawyers to cut corners or have given the appearance of partiality.

In United States v. Atwood (2019), for instance, she wrote for a unanimous panel and vacated the sentence imposed by a district court judge because the judge had improper communications with his former colleagues at the prosecutors’ office. Those communications, she wrote, “invited doubt about his impartiality.”

Barrett wrote that the judge should have recused himself to avoid the appearance of impartiality and ordered that a different judge redo the sentencing.

In United States v. Lafoe (2019), she and two of her colleagues unanimously reversed a district court judge who relied on the prosecution’s factually inaccurate statements and didn’t give the defense an opportunity to rebut them. The panel wrote that a lower court could not be excused for “mix[ing] up the underlying facts.”

Similarly, Barrett’s jurisprudence can’t be distilled to either “pro-government” or “pro-defendant.” It cuts both ways depending on the facts and law of the case and reveals a dutiful evenhandedness. Nowhere is this more evident than in her thoughtful and evenhanded application of the law surrounding sentencing decisions.

For example, in United States v. Briggs (2019), she remanded a case to the district court for resentencing where the court had applied a sentencing enhancement for possessing firearms while also possessing drugs. Barrett noted a problem, however: “The district court had made essentially no factual findings connecting [the defendant’s] firearms to his felony drug possession.”

In order for the enhancement to apply, Barrett made clear that the government would have to present evidence and the district court had to make factual findings supporting that application.

Similarly, in United States v. Moody (2019), she and her colleagues remanded a case to the district court for resentencing because they believed the district court erred by applying a four-level enhancement “for trafficking firearms to people he knew (or had reason to know) were unlawful users or possessors.”

Barrett made clear that “[n]one of this is to say that [the defendant] is assured a lighter sentence on remand.” She simply wanted the district court to consider the appropriate factors under the appropriate legal provisions when determining the sentence.

Barrett has also upheld enhanced sentences. In United States v. Geary (2020), she upheld the district court’s application of a sentencing enhancement where a mother allowed her daughter to be sexually exploited and photographed.

Additionally, in United States v. Kennedy-Robey (2020), Barrett wrote the opinion upholding a district court’s above-guidelines sentence for a defendant who had a history of conducting fraudulent schemes and had been most recently convicted of mail fraud.

Lastly, Barrett’s jurisprudence on death penalty cases undermines the claim that she, as a Catholic, would be unable to put her personal views aside and decide a case according to the law. Barrett has twice joined opinions by her colleagues and voted to deny last-minute stay applications in Lee v. Watson (2020) and Peterson v. Barr (2020) because the law required that result.

In conclusion, Barrett’s criminal law jurisprudence reveals that she is committed to maintaining the integrity of the process and she carefully decides each case according to the relevant facts and law.

One test of a good judge is: If you had to appear before her, would you be confident that you’d get a fair shake? With Barrett, the answer is, resoundingly, yes.