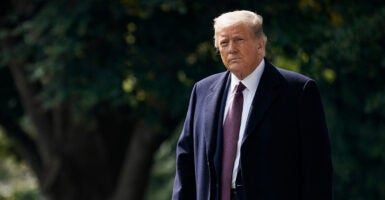 “I don’t know much about the Proud Boys, almost nothing, but I condemn that,” President Donald Trump says. Pictured: Trump walks to Marine One on the South Lawn of the White House Oct. 1, 2020, in Washington, D.C. (Photo: Drew Angerer/Getty Images)

“He should condemn also Antifa,” Trump added, referring to former Vice President Joe Biden. “Antifa is a horrible group of people. They kill people, what they do to people, and they are causing insurrection, causing riots.”

“He doesn’t want to do that, but the press doesn’t go after him. And that’s a really bad group of people,” Trump added.

“I condemn them. If I say it 100 times, it won’t be enough because it’s fake news,” the president continued.

The president emphasized that most of the violence he has seen lately has been caused by Antifa, while Biden and Wallace pushed him to condemn white supremacist groups.

When Biden named the Proud Boys, Trump responded: “Proud Boys, stand back and stand by. Somebody has to do something about Antifa and the left because this is not a right-wing problem, this is a left-wing.”

The president walked back this statement to reporters at the White House Wednesday.