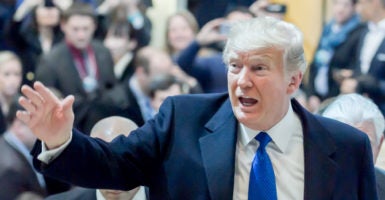 “The Census Bureau will continue to use two separate questions for collecting data on race and ethnicity in the 2018 End-to-End Census Test, and as the proposed format for the 2020 Census,” read the announcement.

“The Census Bureau will not use a combined question format for collecting race and ethnicity; or a separate ‘Middle Eastern or North African’ category on the census form,” noted the announcement.

The changes recommended by the Obama administration included giving Hispanics one single category, diminishing their options to identify themselves as a race identified by anthropologists (such as white or black), and creating a brand new pan-ethnic category for people of Middle Eastern heritage, according to a commentary from The Heritage Foundation’s Mike Gonzalez.

The designation for those of Middle Eastern descent would be “MENA,” for Middle East and North Africa, and the new Hispanic designation “would make it harder for Americans who originate in Latin America to identify themselves as black, white, or some other race,” according to Gonzalez.

Gonzalez, a senior fellow at The Heritage Foundation, and a widely experienced international correspondent, commentator, and editor who has reported from Asia, Europe, and Latin America, told The Daily Signal in an email that the development is good news for U.S. citizens.

“This is a victory for the American people, who have demonstrated again and again that they’ve had it with balkanization,” Gonzalez said. “Creating yet one more pan-ethnic category, for MENA, and cementing an older one, Hispanics, would have taken the country further down the road of division.”

The National Association of  Latino Elected and Appointed Officials Educational Fund, which seeks to increase the effectiveness of Latino policymakers, decried the Census Bureau development.

“NALEO Educational Fund is deeply dismayed that the Trump administration has determined that the Census 2020 will proceed with a two-question format on the collection of Hispanic origin and race data, overturning the recommendation of Census Bureau expert staff to use a combined race and ethnicity question,” the statement read.

.@NALEO says in press statement that it is disappointed by apparent decision to maintain dual race & ethnicity questions for 2020 Census. pic.twitter.com/alPZrCqr49

Vanita Gupta, president and CEO of the Leadership Conference on Civil and Human Rights, a civil rights organization, is also displeased with the decision.

“We are alarmed that the new administration is discarding years of painstaking, objective research that would improve the collection and reporting of this data,” Gupta said in a statement. “We call on Congress to investigate why the administration undermined a comprehensive and, frankly, overdue examination of whether official statistics reflect the full diversity of our rapidly changing population. Congress should not allow the Trump administration’s misguided decision to overturn recommendations from expert Census Bureau staff.”

But Gonzalez says the decision is a step in the right direction.

“More needs to be done, to be sure,” Gonzalez said. “We need to get rid of all the panethnic groups in the five minimum categories for racial data used in surveys. But for the moment not doing a bad thing is a good thing.”