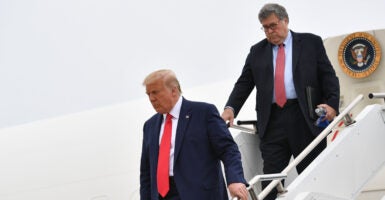 Trump issued statements on Sunday and Monday in response to an article The Atlantic published, written by ABC News reporter Jonathan Karl, that said McConnell, of Kentucky, had urged Barr to state publicly there was no evidence of a stolen election in 2020. The article was based on an interview with Barr, who said he did not see evidence of widespread voter fraud.

“Had Mitch McConnell fought for the Presidency like he should have, there would right now be Presidential Vetoes on all of the phased Legislation that he has proven to be incapable of stopping,” Trump said in a statement Monday.

“Not to mention, he lost two Senatorial seats in Georgia, making the Republicans the Minority in the Senate. He never fought for the White House, and blew it for the Country,” Trump’s Monday statement continued. “Too bad I backed him in Kentucky, he would have been primaried and lost! Based on press reports, he convinced his buddy, Bill Barr, to get the corrupt (based on massive amounts of evidence that the Fake News refuses to mention!) election done, over with, and sealed for Biden, ASAP!”

Trump’s broadside came in response to the Karl article, which reported that Barr had determined there was no proof of widespread fraud that could have tilted the presidential election won by President Joe Biden after narrow victories in Georgia, Arizona, and Wisconsin. Some counties in the states of Pennsylvania, Michigan, and Nevada were also close.

The piece also details a contentious meeting in December between Trump and Barr at the White House shortly after Barr told The Associated Press there was insufficient evidence the election was stolen.

On Sunday, Trump said in a statement, “RINO former Attorney General Bill Barr failed to investigate election fraud, and really let down the American people.” “RINO” is a pejorative acronym for “Republican in Name Only.”

Trump’s Save America PAC issued a statement from the 45th president. Trump has regularly issued statements through the political action committee, but the one about Barr was longer than many prior statements. Trump concluded:

Bill Barr was a disappointment in every sense of the word. Besides which, Barr, who was Attorney General (lawyer), shouldn’t be speaking about the President. Instead of doing his job, he did the opposite and told people within the Justice Department not to investigate the election.

Just like he did with the Mueller report and the cover-up of Crooked Hillary and RUSSIA RUSSIA RUSSIA, they don’t want to investigate the real facts.

Bill Barr’s weakness helped facilitate the cover-up of the Crime of the Century, the Rigged 2020 Presidential Election.

The Atlantic piece noted that the week after the election, Barr authorized federal prosecutors to investigate “substantial allegations” of vote irregularities that “could potentially impact the outcome” of the election. That sparked controversy, since Justice Department policy was to not investigate alleged voter fraud until after an election is certified.

“My attitude was: It was put-up or shut-up time,” Barr told Karl in The Atlantic interview. “If there was evidence of fraud, I had no motive to suppress it. But my suspicion all the way along was that there was nothing there. It was all bull—-.”

The Justice Department looked into allegations of fraud in Detroit, but noted Biden got 1,000 fewer votes in 2020 than Hillary Clinton got in the city in 2016 and that Trump actually improved by 5,000 votes. Where Trump lost Michigan was in the suburbs, Barr noted.

Barr also had prosecutors investigate allegations about rigged voting machines. He had briefings from cybersecurity experts at the Department of Homeland Security and the FBI.

“It’s a counting machine, and they save everything that was counted,” Barr said. “So, you just reconcile the two. There had been no discrepancy reported anywhere, and I’m still not aware of any discrepancy.”

In mid-November, McConnell urged Barr to speak publicly regarding Trump’s assertion that the election was rigged, fearing that it was harming the GOP’s chances in the January special election for the two Senate seats from Georgia. McConnell hoped to campaign on maintaining a Republican Senate majority to act as a check on a new Democratic president.

McConnell was concerned if Republicans acknowledged Biden’s victory, it would upset Trump when the party needed him to campaign for the two then-incumbent GOP senators, David Perdue and Kelly Loeffler, according to Barr.

McConnell reportedly told Barr, “You’re in a better position to inject some reality into this situation.” Immediately after the election, McConnell backed Trump’s right to challenge the results, but after the Electoral College voted on Dec. 15, McConnell congratulated Biden as president-elect.

Trump went after McConnell in the statement.

“What really damaged the Senate Republicans was allowing their races to be rigged and stolen, and worse, the American people to no longer believe their vote matters because spineless RINOs like Bill Barr and Mitch McConnell did nothing,” Trump said in the Sunday statement.

Barr told The Associated Press, “To date, we have not seen fraud on a scale that could have affected a different outcome in the election,” and met with Trump shortly thereafter. The Atlantic article, citing Barr’s interview, describes a meeting between the president and his attorney general at the White House in which Trump was “banging on the table” and said Barr was “worthless.”

The article says Trump asked, “Why did you say it?” Barr answered, “Because it’s true.”

The president is said to have told Barr, “You must hate Trump.”

After Trump recited a number of problems with the vote tallying, Barr criticized Trump’s legal team, and he said Trump seemed to agree.

“This would have taken a crackerjack team with a really coherent and disciplined strategy. Instead, you have a clown show. … That’s why you are where you are,” Barr said.

Trump responded of his legal team, “You may be right about that,” according to Barr’s recollection.

Barr eventually wrote a complimentary resignation letter and presented it to Trump. Barr said Trump read it and said, “This is pretty good.”

However, Trump had a different take on the resignation letter in his Sunday statement, and quoted the letter.

“If he felt this way, why did Barr say he was ‘greatly honored’ and ‘proud to have played a role in the many successes and unprecedented achievements you have delivered for the American people’ in the final letter he wrote to me?” Trump said.

“He said, ‘Few could have weathered these attacks, much less forge ahead with a positive program for the country.’”