The Media and Pollsters Are the Biggest Losers of 2020 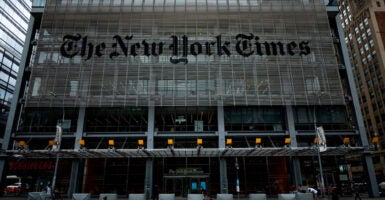 The fact that this election turned out to come down to the wire is a stunning rebuke of both the mainstream polling industry and the media in general. Pictured: The New York Times building is seen on June 30, 2020, in New York City. (Photo: Johannes Eisele/AFP/Getty Images)

There was no blue wave at all, regardless of what ultimately happens in the presidential election.

As of the writing of this piece, we still don’t know who won the 2020 presidential election. Contested vote counts could turn the process of sorting it out into a dragged-out legal battle.

Nevertheless, the result was certainly an upset, especially if you relied on traditional media and polling sources. Former Vice President Joe Biden did not usher in a blue wave to defeat President Donald Trump and Republicans down ticket.

Instead, the election appears to be one of the closest in history, Republicans may well retain the Senate, and may actually make up ground in the House of Representatives.

The fact that this election turned out to come down to the wire is a stunning rebuke of both the mainstream polling industry and the media in general.

Across the board it appears that major pollsters got state after state wrong, and often by large margins. Referring to the RealClearPolitics polling averages, which include data from several polling firms, one person on Twitter observed:

At some point, one wonders what exactly these polls are for. Are they there to bring reliable information to the American electorate, or as a means for media to wish cast for the success of their preferred party?

It seems that when the polls are wildly off, they are wildly off in one direction. Time and again we’ve seen them vastly underestimate the numbers voting on the right as opposed to the left.

“As Inside Elections’ Nathan Gonzales wrote, partisan pollsters were wrong, too,” Olson wrote. “House races that were supposed to be close or leaning to the Democrats, such as in Texas’s 21st and 23rd congressional districts, ended up being comfortable wins for the Republicans. Others that were supposed to tilt in Democrats’ favor, such as South Carolina’s first, ended up being Republican wins. Every level of the industry, except perhaps the outliers at the Trafalgar Group, has to ask itself what went wrong.”

Trafalgar, it must be noted, was roundly mocked by journalists and many mainstream election “gurus,” like Nate Silver, the editor of FiveThirtyEight.

It turns out that the “shy Trump voter” was absolutely something pollsters missed, and the media dismissed. In the world of “cancel culture” and empowered social justice warriors, is it any wonder right-leaning Trump voters are uncomfortable transmitting their views in a public forum?

Even Republican senators holding mainstream American views have essentially been purged from the elite media thought bubbles for having views that make people feel “unsafe.” We saw this when The New York Times essentially denounced an editorial it ran this summer about shutting down riots by Sen. Tom Cotton, R-Ark.

And now they sit around scratching their heads saying, “How did we not understand half the country?”

The media missed other trends too, including the significant shift of key voting demographics to Trump.

There was a significant movement of black men voting for Trump as well. Some “woke” media pundits didn’t take kindly to these changes.

It seems simply dumping Americans into simplified critical race theory boxes isn’t panning out like expected. If anything, Biden’s election chances seem to hinge mostly on shifts among white voters.

Will media pundits call this another “whitelash,” as several notable commentators, including CNN’s Van Jones, did following the 2016 election?

Don’t count on it.

For a media high on the frenzy of the woke crusades to paint America as a hopelessly and structurally racist society, it is a stinging rebuke that Trump actually made gains with nonwhite voters who clearly didn’t buy in.

It turns out not all of America is a college campus after all. There is still a healthy diversity of views among the American electorate, perhaps one that is tired of being told how to think and vote.

Predictably, most of the media missed this. The revolution has been thwarted, for now.

As Ben Domenech wrote for The Transom, the media and polling industries took no lessons from 2016 and doubled down on hubris.

“The failure of the media in 2016 was written off as a fluke,” Domenech wrote. “They wanted to pretend that Donald Trump snuck up on them, and that there were always warning signs, and caveats, and so on. This time around, their hubris was even more evident, confidently projecting outcomes that never came.”

The bottom line is that whoever the winner of the 2020 presidential election is, the biggest loser is the media followed closely by pollsters.

If history is any guide, they won’t learn their lesson this time around either.

This article has been corrected to note that Henry Olsen is The Washington Post columnist who wrote about 2020 polls.